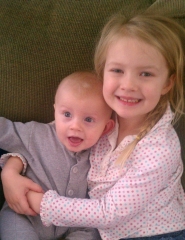 A co-worker told me this morning that OCD is an inherited trait.

But I didn’t learn that today.  No, no; I’ve known (via empirical evidence) for a few years now that OCD is an inherited trait.  I’ve seen it firsthand, passed on (passively, at least) lovingly from me down to our daughter.

First, some setup: We’re not talking OCD like those half-hour shows you see on cable at night where the girl washes her hands so many times a day that they are bleeding and raw.Not the kind of OCD like the guy who locks and unlocks the door to his apartment nineteen times when coming and going.  Nah… this is just the kind of OCD like I have, where, when I see a tableful of magazines and papers and remote controls I want to stack them in a neat pile according to size.

So, bad… but not really life-impacting.  More like this stuff, or these things, or maybe a little of this.  Strange; odd; eccentric; but overall nothing more than the the human cruft we all come with.

Now then… here I am to tell you another endearing story, the germ of which is the ongoing joke about my daughter’s inherited OCD.  This story is about Keaton’s somewhat ritualistic morning “goodbye” routine.

Some mornings when I leave for work, Keaton is already awake.  Some mornings, she’s still asleep in bed.  But nearly every morning, regardless of her waking state, she manages to communicate the following to me before I close the garage door, get into the car, and drive away for the day:

Daddy!
Don’t work too hard.
Think about me and how much love that I give you.
Don’t find any crabs or spiders.
Tell anyone I know that I said, “Hi!”

Always those exact words, always those exact phrases, always said in that particular order.  Almost every single day.  Even on days when she’s hard asleep and I make it all the way to the car backing out of the garage she’ll sometimes burst into the garage in her pajamas and wait for me to roll down the window so she can say her little piece.

Most of it makes sense and is expected “goodbye” fodder… all but that bit about “crabs and spiders.”  Who knows… maybe she really doesn’t like crabs and spiders (I’ve always thought they look sort of similar anyway, so maybe they’re equally undesirable to “find” in her mind).  Good advice in the end, though, I suppose…

I really do love that little girl.  Goodnight.

One Reply to “don’t find any crabs or spiders”