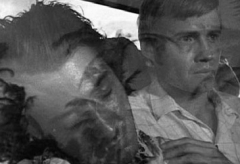 One of the most memorable things I’ve done in my thus-far far-too-short life was a thirty-six hour Greyhound bus trip from Florida to the hill country of Texas.  You wanted adventure, you got adventure.

Maybe not adventure like Bond would find in Monte Carlo, but adventure sort of what like Sal and Dean found on the road.  OK maybe thirty-six hours can’t compare, but there were some real now etched-in-stone moments for me during that trip.  When I visualize the time in my head I see that famous ending shot of Joe Buck and Ratso Rizzo and I hear the Simon & Garfunkel song, “America.”  I know, you’d expect Nilsson, but Simon’s bus-ride anthem lines about, “Michigan feels like a dream to me now,” and, “We smoked the last pack an hour ago,” seem to fit so perfectly.

In Defuniak Springs Florida a young overweight guy took the seat next to me.  I didn’t really want to talk, but he did.  I can’t remember his name, but whatever it was it should’ve rightly been Bubba.  Bubba was leaving his dad’s house in Florida and heading to his Mom’s somewhere I can’t remember.  Once there he was going to finish one more year of school and join the military.  His innocent eyes gleamed with the recruiter’s details: A career, authority, fat pockets and world travels.  On the bus in the first place to go visit my buddy in the Air Force and not wanting to knock the military, for there really is no reason to do so just because it’s not your chosen path, I played it non-committal and agreeable.  Turns out Bubba was a downright nice guy, like nearly every person I met on the bus, actually.  I saw him off somewhere in Alabama or something.

Somewhere, still in Florida, I decided to take up smoking for the rest of the ride.  The knot of folks gathered as they indulged at each stop was what convinced me; it was where the socializing happened.  I bought a pack (one of probably a handful I’ve ever bought in my entire life) and joined them astride the coach to talk about whatever bus-folks talk about in the middle of the night while they share cigarettes.  I didn’t even think about eating, they never stopped long enough to consume anything proper.  When hunger started to kick in I bought a family-size bag of potato chips and one of those pre-made sandwiches from a gas station.  In thirty-six hours that and a bottle of water and a pack of cigarettes were my sustenance.

That night a dirty skinny dude got on from the middle of nowhere Louisiana, likely going nowhere to boot.  Guy had the shakes, DTs, white-horse  jazz-step, whatever you want to call it.  He sat a couple rows behind me, bopping and scratching and mumbling.  Made everyone around pretty uncomfortable with his retching sounds and junk-sick ticks.  Somewhere near the Texas border, in the middle of the damn night, the driver stopped the rig and actually put the sad sucker out, said something short like, “It’s my bus and you’re not on it anymore.”  Right out onto the road into the middle of nowhere from whence he came.  I remember feeling so bad for the character, turned out into the dark with only whatever hooch or scag he had in his backpack to last until those shakes and visions came back.  Hope he got where he was going.

The time I spent in Texas was awesome, one day I’ll write more about it (I’ve done a little already, again from the tobacco angle), but this was about the bus.

My bus back left Dallas on New Year’s day.  The station was absolutely packed to the gills and every single bus was running late.  I couldn’t find a place to set up camp inside so I wandered out into the pull-through area where there were already several groups of folks sitting around on the concrete.  I settled down near a group of not-yet-old black guys who were sitting atop their suitcases and duffle bags, situated in a circle tossing dice, smoking, and seemingly having a grand old time.  After a while the asked me to join them and I enthusiastically accepted.  By this point the whole trip had me pretending I was some windblown road-dog character from a novel, out cutting his teeth on the world or something.  I had a great time playing some Dallas bus-stop variation of Gin with the guys, smoking menthols and swapping stories.  When it got late (or early, maybe) I excused myself to curl up and sleep.  The guys gave me a tip before they wished me well, “Better sleep on yo suitcase ’round here; else it might not be there when you wake up.”  Good advice, and I did.

When I did wake my new friends were gone and my bus was still not in from wherever it was.  It was going on first light now and I wanted to get out of Dallas.  I saw folks climbing aboard a bus marked for Atlanta, which seemed a heck of a lot closer to Florida than Dallas.  I walked up like I belonged, handed my suitcase to the porter and watched him stow it below the bus, and walked aboard.  When the driver walked the aisle to do his ticket-check, I feigned sleep.  Soon I was Georgia bound, and it all felt even more romantic, breaking the rules and all.

In Atlanta I played dumb, pretended I had no idea how I’d got on the wrong bus, things were crazy in Dallas, all messed-up, I’d said.  The agent took pity on my ignorance and told me she could get me as far as Tallahassee.  Better, but not home yet.  In Tallahassee things went much the same as Atlanta, but this time I was only looking to go another few hours.  After a short terminal nap I lucked into another bus headed further south.  Before I left I called Sharaun from a payphone (no mobiles in those days, my friends) and told her I was five or so hours away.  In the end I beat the bus I was booked on by three hours, not bad for freeloading.

Man that was a fun trip.  Never again.

2 Replies to “not bad for freeloading”