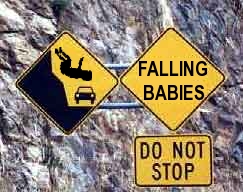 Thursday night as I write, and in the battle of Dave vs. Dave’s Job, Dave won handily. I took the to-do list by the horns and walked it around the arena in disgrace.

Ever since we got the nursery’s rocker (I still have trouble referring to it as a “glider,” although that’s surely what it is moreso than a rocker) fixed up with the help of Erik & Kristi – I head into that room daily to just sit and think on the thing. Mostly, I try to imagine myself holding a baby whilst “gliding,” or watching a baby sleep through the cribrails. I just sit there in that pink room and pretend. Won’t have to pretend for much longer I suppose, but it’s some sort of experiment or internal bet I’ve got going with myself: that no matter how much I rock there, trying to imagine she’s already here, it’ll be nothing like the days when I’m sitting there and she is actually here. My money’s on me not being able to imagine it accurately, not being able to peg the feelings having never experienced it. If you can’t tell, I’m hotly anticipating this one… and the incessant baby-babble is likely to continue for a while. What a puss.

In other baby news (who’d’ve thunk), I think I chosen the song I’d like to be her 1st song. The ride home from l’hopital song. Beatles? But of course, could it be anything else? The track, coincidentally enough from my favorite Beatles LP, “I Will.” I’ve always thought of the song as romantic, girl-focused, whatever. But, when it came up on shuffle the other day, I realized it’s not necessarily limited to the love where one heterosexual wants to bone another heterosexual, it’s a kind of ambiguous love that could, in fact, be taken as referring to family. Plus, it’s a gorgeous soft song, perfectly short and quiet for a sleeping newborn – and more importantly, a newborn girl. A boy might get something edgier, but this song is just right for someone coming home to a new pink bedroom. Check it out, in all it’s DMCA-violating glory, here.

I just don’t have the will to write more, at least I had a full week. Peace out.

2 Replies to “and when at last i find you”