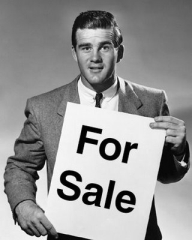 Wow. Broke my streak yesterday, huh? Been doing so well, too. Guess between working, getting to the airport, flying, getting to my folks’ place, and going to bed – I just didn’t have time to write. It’s OK, I’m back… for what it’s worth.

Coming to Oregon ended up being an exercise in time-travel. See, it’s clearly still winter here, with daytime highs in the 50s and cloudy grey skies overhead. Coming from the sweaty-crotch beginnings of summer back home it’s quite a difference. I kinda like it though, I’ve always been partial to the “vibe” of the fall/winter seasons, even if they are the unnaturally undying ones of the Pacific Northwest.

When we got to the airport last night Hertz had us in a two-door convertible. I stood beside it for a good minute, thinking. In the end, I decided that, with the carseat and the potential for carting around Grammy and Grandpa as well, I’d better exchange for a four-door. They gave us a “Sportage” instead, some sort of smaller SUV thing. It’s not bad I guess, but I bet, cubically speaking, it’s not really much larger than the convertible. It works though, even does OK at making me feel like I’m driving my trusty busted-ass Ford back home.

Speaking of that busted-ass Ford, I was admiring it’s broke-down charm the other day. I’m not gonna lie, it’s in pretty bad shape. I don’t wash it, I don’t clean the inside of it, it’s 7,000mi overdue for an oil change, and it makes all sorts of unnatural groans and creaks and squeaks and grinding noises. Still, though, I love that car. We bought it used right after we moved from Florida, it was three years old at the time and in pretty good shape. I had no idea how to buy a car, had never done it before, but I thought I came out of the deal OK (at least, according to the internet at the time). Funny though, having had a little more time to come to feel familiar with a family budget and sort of lock into comfortable spending pattern, I’d probably look for something with lower payment were I to go buy new today. But, it worked out, and I’m still driving the (well worn) beast today.

Nowadays, it’s been paid off for years and I only use it to go back and forth to work, which is some ridiculously small distance right around three miles from the house. Sometimes I think I should get rid of it, but then I remember how I do like to take it on “longer” trips – and that I do get good use out of it doing things like driving up the mountains to Tahoe or to Yosemite or something (which, in honesty, we don’t do much at all). Mostly though, I remember how I use it to go back and forth to Home Depot or Lowes, and how I can stack bricks or fertilizer or wood in the back. I think, though, above all, I remember how it costs me only gas to have the thing, and how I put that cable in there so I can play my iPod in it, and how it’s the only vehicle I’ve known for the past eight years. I remember that and think, “I’m gonna drive this thing into the dirt,” and give the dashboard a quick caress (after which I have to wipe the thick dust off my hand on my shorts).

I probably jinxed it now. It’ll die next week. Watch.

Ended up buying a suit tonight, from a guy who could’ve sold me the moon. Seriously, I fell in man-love with this guy. He played basketball with Marvin Gaye, was a backup singer on a George Clinton record, and pretty much likes everything I like: He loves camping and hiking, speaks Mandarin, has lived everywhere I’ve ever lived, knows all the places I know… the guy was the penultimate salesman. He chose shirts based on my complexion, he eye-sized me to the inch, and had me smiling and laughing the entire time. I had to restrain myself from just handing him the credit card and telling him the limit. After I had paid and was being escorted to the door, he told me, “If you’re ever in the area again, stop by and see me if you need anything.” Honestly, I just might “need” something after all…