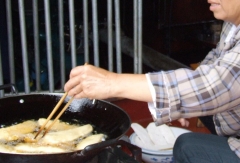 Hi guys. Sunday in Oregon here, happy Mother’s Day to all the moms out there.

Whenever, as I did last week, I spend a few days working from the Oregon sawmill close to my parents’ place, I wear “manager clothes.” Meaning, I wear dress slacks and collared shirts and fancy shoes with colored socks. Back at home, where I come to work every day as a manager, I wear jeans or shorts, mostly polo shirts, and dingy sneakers. In what I like to think of as taking advantage of not being around the Oregon sawmill very much, I used what brief time I have there to let people think I may actually dress nicely on an everyday basis back at home-base. I don’t know if this charade works, but I do it anyway. Somewhere in Oregon, there are people I work with who think I dress like a manager all the time (maybe). One day, I might actually start dressing like a manager all the time… I just may do it.

It was a good weekend though. Good time with Sharaun, with Keaton, and with Mom and Dad. Felt like a decent time away, too. There are a few weekend happenings I could write about, but I thought the following one might work best for the blog. Here goes.

We took Keaton down the the little park near my folks’ place on Sunday to let her run and jump and climb and slide and do all the fun kind of things kids do that help them sleep come naptime. While we were there, an Asian woman was out on her front porch at a unit nearby the park. Squatting down and hunched over an electric frying pan with a gallon jug of oil on the ground nearby, she was tending to whatever she was frying, turning them with a pair of long chopsticks. I waved and smiled as Keaton and I kicked a ball near her, and she waved and smiled back before turning her attentions back to her cooking.

Later, as we were playing, the woman called Sharaun over as she passed nearby. Answering “two” to the woman’s question about how old Keaton was, Sharaun was then surprised as she handed her a little paper plate with three pieces of what looked to be homemade egg foo young and a little plastic fork. Then, in a combination of broken English and the more universally understood pointing and motioning she indicated they were for Keaton. When I saw what was going on, I ushered Keaton over to accept the food and encouraged her to say her “thank yous.” And, for the rest of the time at the playground, she munched on egg foo young between running and jumping and climbing and sliding and all the fun things kids do at the at the park that help them sleep before naptime.

Thing is, I thought this was totally cool. Helped reinforce my theory that an overwhelming majority of the humans on this rock are inherently good people. I’m telling you, people are good. They just are.

And now, off to sleep to wake and fly back. Goodnight.