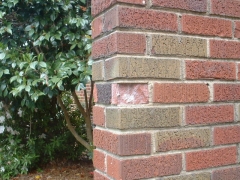 First off: Yes, the James story was fiction. I couldn’t think of anything to write, so I decided to tell a story. Thanks to those who mentioned enjoying it. Somehow, though, I don’t think storytelling is my thing – so I stick to the regular play-by-play hyperbolized-realism I seem to be better at.

Friday: Anthony calls me around 10am to say he may have an extra ticket to this big ol’ rock show going down in the city. Asks me, if it becomes available, would I want to go. I say “yup.” Noon, the ticket is mine, and I’m to be at his house by 3pm. We arrive in San Francisco sometime around 6pm and stand in line in the freezing cold with eight-thousand other mods-‘n’-rockers to get in. It was a packed bill at six bands. I was excited to see Modest Mouse and Spoon, but the entire show ending up being quite enjoyable. Anthony and I even braved the very young crowd to crush right up into the guts of the floor by Modest Mouse’s set. Home by 2am.

Saturday: Used the morning to catch up on three days of little sleep, woke up at 10:30am. Took a shower, pulled on some jeans, and made the conscious decision to not don a shirt. I intended to remain shirtless the entire day. Sharaun went on a Christmas shopping odyssey and was gone all day, stopping home only briefly around 5pm to bring in a take-and-bake pizza, cook it, eat a slice and head back out. I spent most of the day playing with Keaton and taking picture of CDs I’m selling on Ebay. Never did put on a shirt, either. Not even when a friend dropped by unannounced later in the evening on the way between two bars. I stood there in the living room and had a half-hour conversation barefoot, barechested, and bedenimed. A great lazy day spent being daddy.

Sunday: Church. Driving there we saw a bum on the offramp holding a ridiculously small scrap of cardboard, on which I assume a standard plea for assistance. You know, something boilerplate bum-verbiage, including go-tos like “God bless,” “Vietnam vet,” “anything helps,” and “hungry.” The little piece of cardboard was so tiny, though, that we had no chance of reading it. I jokingly said, “You need a bigger piece of cardboard, buddy.” Sharaun made some comment about him needing one of those big spinny arrows or placards like the sign-people on the corner use to bring in potential homebuyers or lure people to the Cheesesteak joint. Sounded like a brilliant idea to me. I predict panhandlers will soon turn to this more animated form of begging. After church I repaired some of the faux-stonework that has fallen off the front of our house. The fallen pieces stayed where they fell for years now, and the guys were giving me crap about it the other day. So yeah, Sunday I made fun of bums and did home repair.

For some reason the other day, Sharaun had Keaton’s old bouncer out from storage. She took a picture of Keaton sitting in it, and I thought it would be fun to compare that with a picture of her in it when she really used to use it. So, for a lark, here’s three months and twenty-two months. Pretty sure she’s over the weight limit in that second one…

Back some time ago, I made the decision to digitize (convert to MP3) my entire CD collection. After which I sold off all my then-redundant physical discs for profit. If you’ve been with me for a while, you’ll remember that the plan took a long time, but was ultimately wildly successful. I ended up selling ~600 CDs, making a little money in the process. Not bad. In fact, it financed a bit of my Lasik surgery, so it was well worth it. When I sold my discs, though, I held onto all my prized Beatles bootlegs (as well as some other prized bootlegs from various other artists). I knew that, one day, I’d start selling them off too –but I hung onto them partly because of my strong attachment to them, and also because I figured they could fetch more if sold properly (“marketed” as sufficiently rare, etc. – which they indeed are). Anyway, I wrote this whole mess because I wanted to share some statistics:

Selling non-bootleg CDs, I made a somewhat respectable amount per CD. Bootlegs, however, have proven to be much more lucrative. Over the past couple weeks, I’ve been slowly but surely offloading my entire Beatles bootleg collection online. What’s amazing is that, on average, I’ve been making more than ten times what I made selling my “commercial” discs. Not to mention I’ve got another pile of bootlegs from artists who aren’t the Beatles, which I’m hoping will pull just as much dough. As an example of this insanity, while packing up one nine-CD set for sale, I happened upon my original purchase invoice from back in the mid 1990s. Right now, it looks like it’s actually going to make money over that cost, meaning the dang thing actually appreciated while I owned it. Unbelievable.

As you can imagine, I’m working frantically to get all the discs up for sale, as I suspect this is the season where I’ll realize the highest profit on them, capitalizing on Christmas gifts for collectors. It’s bittersweet, selling them off. It feels good to make money, but those things were such a big part of my life at one point. It was such fun acquiring and hearing them for the first time. Scouring obscure record bins for high-priced “imports,” dealing with shady mail-order joints advertised in the back of Goldmine, ordering from “contacts” in Japan and Europe… it was all a big game of cloak-and-dagger where the reward was untold joy at getting to hear Beatles stuff I’d never before heard. It’s sad to see them go, but it’s not that sad… I still have the music, after all.