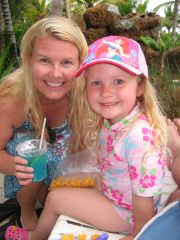 Each day so far has started early at the fitness center, which, actually, is really nice.  And, with my back worse than it ever was hairy – all broken out in a blooming acne-like rash where the hair once was (read here if that makes no sense) – it’s occurred to me that the folks who see me in the gym at six o’clock in the morning and then later shirtless in the pool might think I’m a hardcore juicer.  “Oh, there’s that steroid guy,” they’ll say… “I see him every morning in the gym and just look at that back acne.”

Sigh… waxing: for me, not a good idea.

So far the weather here in Aruba has been a bit overcast and cloudy, and we’ve got spotty Florida-like thunderstorms that come and go in a blink every day so far – although only lasting for a half hour at the most.  Honestly it hasn’t dampened my spirits at all.  Floating around the lazy river with Keaton has been a blast, and when the sun does peek out it feels wonderful on my jacked back.  Keaton wore herself out yesterday, and as soon as the early morning rain breaks today I’m sure she’ll be more than ready to do it again.

We took a taxi into town yesterday to stock the kitchen in our room for the week.  Spent a small fortune on groceries for our little room, but will still be cheaper than eating each meal out every day.  Plus, it’s convenient and kinda fun doing meals in the room – especially with Keaton. The father-in-law and I got a small styrofoam cooler and a case of 10oz Budweiser cans and we save some money before and after happy hour quaffing cheap supermarket beers instead of the poolside marked-up versions of the same.

And, since sitting around writing on the computer isn’t really part of my planned vacation routine, I’m gonna sign off now and holler at you guys later.  Hope work is treating you workers well.