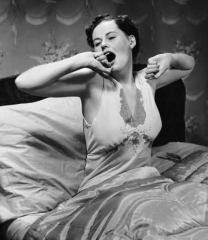 Happy Monday folks.  Gonna be a busy three days, both at work and home, before we fly up to Oregon to hang out with Grammy and Grampa for Mother’s Day.

And me?  I’m still groggy from a doozy of a Sunday afternoon nap. Went into the city last night with Anthony to see Rogue Wave in concert, didn’t get back home until 3am. The late night, combined with the somewhat early rise for church made for serious case of the post-lunch sleepies. So, I deferred the tons of yardwork I had planned and settled down shirtless on the couch for a “short” nap soundtracked by XM’s “Deep Cuts” station. Three hours later, I awoke in one of those well-rested states of ultimate satisfaction. Yes, I slumbered away the sweet-spot of the day, but man was it some kinda rewarding in it’s own special way. So, setting the tone, I’m still here reveling a little bit in waking rested and happy.

Saturday this weekend I wanted to take Keaton out for a bike ride (or, bike tow, to be more precise).  We got on the road around 9:30am, after a breakfast of pancakes and eggs (I rarely ever eat breakfast, but sometimes Saturday affords me the time and/or motivation).  I packed her into the carrier with some juice and a baggie of Goldfish, and threw a blanket in the back just in case she got cold when we got going.  We were on a short timeline, since we were due at a two-year-old birthday party at a park across town by 11am.  I opted for a ride to the park, a quick romp on the playground, and a ride back.  It was a good time, and I’m hoping it helped at beginning to acclimate her for longer trips.  Even by the end of the short ride to the park, she was asking to get out and walk, so I still have some more breaking-in to do.  Was a good time though, peep the pictures:

And I’ll leave you at that.  Tomorrow I’m going to try to cram in a lawn mowing, prep for big-trash day on Tuesday, and a bunch of lunchtime errands – I’m giving 3:1 odds.