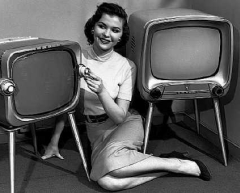 Happy Tuesday morning folks, just one day closer to a change of venue for us as we’re headed up north to visit the grandparents (my folks) after work on Wednesday. I’m ready, if I haven’t mentioned that already. I love days when I can utilize my time to the fullest. Today, I came home for lunch and pre-edged the lawn for the mowing I knew I’d be doing after work. Not that it saves a whole heck a lot of time, but any little bit helps.

I’m gonna jump around a bunch today. Yeah, try to hold in your shock.

Today, Keaton demonstrated two new skills she’s picked up somewhere along the way. Both of them are pretty good, so I figured I’d write about them. First up, unlocking the front door. She’s been tall enough now for a while to reach the lock, but, until recently, she’s been a fairly cautious baby (I mean, she’s still on the cautious side, but she’s beginning to take a few more risks). Today, however, as I was out mowing the lawn, I made one pass, turned around, and there she was standing right in my line – smiling and waving silently thanks to the tunes in my noise-blocking earbuds. I looked around for Sharaun but she was nowhere to be found. So, I cut the mower, paused the iPod, and bent down to talk to her. Just then, Sharaun came from the front door shaking her head. “She can unlock it now,” she said. Awwww stank. Now she can come and go as she pleases, I suppose. For now, Sharaun actually put an ‘X’ of masking tape over the lock mechanism, and I assume will investigate a more sound, for-purchase, solution shortly.

Next, and this one is my personal favorite just for the ingenuity and craftiness it shows, her new “Mommy said yes” thing. Just today while I was home for lunch I caught her “swinging” from the gate we have to block off access to the kitchen (hanging like a monkey is a more accurate description). I told her, as I have before, “Keaton, we don’t swing on the gate.” To which she replied, “Mommy said it’s OK to swing, Daddy.” Confused, I asked Sharaun, “Did you tell her it’s OK to swing on the gate?” “No,” she replied, having not heard Keaton, “Why?” “She just said you did,” I replied. “Keaton did I tell you it was OK to swing on the gate?,” she asked. “No, it’s not OK,” replied Keaton. Busted; cold-busted. At the time, I wrote it off as a fluke, but then…

When Sharaun had to leave for a meeting and I was wrapping up my yardwork by putting away the edger, she brought Keaton out to the garage so I could watch her. While we were in the garage putting things away, she saw her new bike-trailer and said, “Can I go for a bike-ride Daddy?” “No, not right now baby, it’s getting late and Daddy has to take a shower.” “Oh,” she says, “Mommy says yeah.” Turning to look at her, I ask, “Mommy said it was OK for you to go on a bike-ride?” “Yeah, Mommy said it was OK.”

This kid, she’s already playing us. I love it. She must think she’s so slick. But, I’m onto her games. As a kid, I used to pride myself on techniques I used to “work” my folks (even though I’m realizing now they likely saw right through most of them), so she’s gonna have to work harder to pull one over on me! Sharaun, on the other hand, may be low-hanging fruit. We’ll see…

Well, folks, after much brain-wracking and flip-flopping on position, I think I’ve finally settled on a course of action, or, more accurately in this case, course of inaction, regarding the TV-upgrade situation. I’ve decided to put my purported minimalist ideals where my mouth is, so to speak, and delay indefinitely the purchase of a bigger, flatter, sexier and higher-definition television. Yup. I’m for real.

At the least I’ve decided that I won’t purchase a new TV at all until our old one gives up the ghost, and right now my intended course of action when that happens is to simply reevaluate the cost-efficiency of a newer model. Meaning, if there is no price-based reason not to chose a sweet, awesome, HDTV over another “regular” model – I’ll make the purchase. If we’re still talking thousands of dollars in premiums, I think I’ll continue to pass. (I could be wrong here though, those TVs are pretty flat and rectangular and sweet, after all.)

Yes, people will make fun of my small boxy television, I know this. But, for reasons I’ve laid out here on the blog recently, I honestly think this may be the best solution for our family right now. And, besides, it kinda makes me feel all snarky-good and “above” materialism (says the guy with two cars, five iPods, etc., etc.).

Before I go, wanted to do some link-sharing… check it out:

Similar to the fascination I’ve expressed several times here on this blog with the Edgewood Hospital website, I became enthralled this week when I discovered several websites and forums dedicated to the modern-day activity called “urbex,” or urban-exploration. Urban explorers are a group of folks who share a common love of exploration, armchair archeology, architecture and building design, and, often, photography – not to mention a healthy fear-fetish, it would seem.

Think about it, what guy can say he doesn’t get a little excited being somewhere he’s not supposed to be? I mean, looking at the back of the “Danger – No Admittance” sign from the “wrong end” is one of the central sources of entertainment for teenage males, why should we expect that to change as grow into respectable adults? We shouldn’t, and that’s why this whole “urbex” thing was so immediately attractive to me. I spent about an hour paging through this guy’s page, following his exploits into ghost towns, rundown factories, condemned mental facilities, and the like. I particularly like his trip into a forgotten Detroit police station, complete with mug shots, a stocked evidence room, and riot gear.

G’night people. Hope you’re as warm and comfy as I am.