I don’t know how I didn’t manage to post on Wednesday, I’ve been writing more than enough for a post-a-day – I’m just royally confused by the timezone thing and set Thursday’s entry up to post that day instead of Wednesday. Whatever.

This morning I woke up feeling incrementally crappier than the past couple post-cigarette-binge days (for a weakling like me, five smokes constitutes a “binge”). My throat was sore and I had so much crap in my head and chest. So, before I hopped a cab into work I stopped in the 7-11 to look for some cold medicine. I was hoping for some Theraflu or Cold-Eze – but it seems they don’t really sell medicines in the convenience stores here. I didn’t even see Tylenol or Rolaids or anything with active ingredients. I did, however, see this: 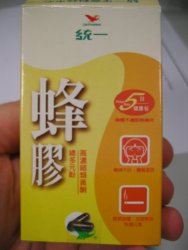 It may be hard to see in that small picture, but it’s a yellow box with a lot of Chinese writing. What caught my eye, however, were the little pictures in the bottom-right. The first one shows a man who has his hands up to his face, like he’s tired or maybe even holding his sore throat. The second one actually shows a cigarette. Now, to me, this looked like a Chinese miracle cure for cigarette-sickness. On the bottom of the box they show two little pill capsules containing what looks like a brown powder. The price, 75NT, and the thought of being able to write about the stuff, made me buy it. So, when I got to work, I asked my Mandarin-speaking buddies what I had just bought. They said, “If you are working all day and tired, or weak from smoking, you take this for health.” Bingo! It really is the Chinese miracle cure for cigarettes! I asked if they could tell exactly what the stuff in the pills was, to which they replied, “bean jelly.” Great. The miracle cure for cigarettes is bean jelly. The Taiwanese people love them some beans. So, I think I wasted 75NT on some powdered bean junk that won’t make me feel a lick better. I popped one anyway though, y’know, just in case.

I am unbearably tired, to the point of having a little dull ache somewhere behind my eyes – my mind’s way of telling me to get some rest I guess. I don’t know about other guys, but for some reason when I’m in one of these hopelessly sleepy states, where my eyes are heavy and I’m barely able to focus, I tend to get an erection. Yeah, you heard me – I get my plump on when I’m nodding off. This is particularly unfortunate if I happen to be having a hard time staying awake during a customer meeting – and it’s doubly bad if I’m dozing in the time before I have to get up and speak. It’s like a flashback to the middle-school days of uninvited boners during class and being asked to come do something on the chalkboard (I never actually experienced that, but if TV sitcoms are accurate depictions of pubescent teenage life I’m probably the only one). Once again, though, the internet has come to my rescue by making me feel less a freak than I initially thought. Doing some research, I found this: “A man’s penis becomes erect (“hard”) in response to… deep relaxation….” Well I’ll be damned, I’m normal

I often experience changing emotions when traveling, especially when I’m away from Sharaun for extended periods of time. There’s always that initial excitement from traveling and being somewhere different, with different things to do and see. And while I’ve always got a general “awareness” that I’m away from my wife, I sometimes feel it more acutely at random times while away. Like today, riding in a warm van to one of the customer visits, I just started feeling guilty for being away. Guilty for going out and doing things without her, and guilty for going out and doing those things with girls that aren’t her. That’s the crux of it really… spending time with the girls that I’ve befriended over here. If I do a little role reversal, and imagine her away on business in some foreign country and going out with some guyfriend I’d never met, I think it would indeed get under my skin. Not that there’s a lack of trust, and not that there’s a reason for there to be one, but love and jealousy are funny things. I don’t know quite where I’m going with this. I think I maybe just wanted to put down in writing my realization that one’s consideration for one’s significant other’s feelings should increase proportionally to one’s removal from that significant other’s presence. If you’re far away and free to do what you will, imagination is all that’s left for the one you left behind…

Wow. I did a really poor job trying to say what I was trying to say. But that’s OK, because I’m done with confessional and feel no better for it; I’ll just be glad when my wife gets here.

I’m telling you right now, you will hate this new album that I love. You really will. Oh man, I can just imagine everyone who hears this going, “Dude, what the hell is this?” But I gotta tell you, I really like it. I’ve enjoyed A Silver Mt. Zion’s records before… they put a unique twist on the standard style of music I for some reason call “post apocalyptic.” I really, really, don’t know where that term came from – maybe Ben, maybe Pitchfork, but it fits well for the kind of music. Anyway, this is discord and minimalism at it’s greatest, simply wonderful. Evil sounding at times, and just creepy at others… but also with a softer side. The songs are all just a bit uncomfortably too long, but in a good way. I can’t explain it, but it’s got a grating quality that makes it fun to listen to. Shut up. I know what I’m talking about. Shut up.

Off to enjoy my 1st weekend in Taiwan. Because I’m a day ahead of you. Jealous?