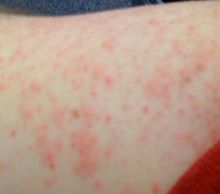 Yesterday evening I went to my pre-Aruba “appointment.”

For those who don’t read regularly, a very succinct summary: I’m a totally hairy dude, hair all over my back and shoulders. And while I’m not ridiculously self-conscious about it, I made an appointment to get a waxing, something I’ve never done before, prior to our vacation in Aruba this coming week. Last night was that appointment.

First off, the process took seventy-five minutes start to finish. That’s an hour and fifteen minutes. Of waxing. Of ripping and tearing and pulling, over and over and over again… for more than an hour. By the end of the whole thing I was in a pretty irritable mood, and was, in general, ready to go. My “technician” was a nice Asian lady who was good at making conversation and asked me at every turn if I was “OK.” The “procedure” takes place in cramped coffin of a room, laying down on a towel-draped table while a woman slathers hot sticky stuff on your hair, presses a little napkin thing down on it, and then rips it off a lightning speed.

And, just to cut to the chase – yes, having your back waxed hurts. There is no denying that. However, having heard from folks just how much I should expect it to hurt, and having steeled myself against the immense pain that fear mongering had prepared me for – I have to say it wasn’t as bad as I’d imagined. No I didn’t cry, and only cried out once. I rocked it like Superman, if I’m being honest. But yes, oh yes, it hurt. I found that the worst of it was my shoulders, along my collarbones, and the very nape of my neck. In fact, the one time I had an audible reaction was on my left shoulder, where something must have went wrong because the pain was at least 2x what it had been for everywhere else.

Mmm hmmm there was blood too. Not at first though. My lower back went easy, very little “large” pain and Chong commented how well my skin seemed to be taking it. But, the higher she went on the back the more blood flowed and the more pain I experienced. But, reiterating, overall the pain was bearable – although surely unpleasant and uncomfortable and nothing I’d wish on someone unless they lie down on that table willingly. My main complaints would be the time it took, and the post-pain and problems… such as…

What I find upsetting now, however, is that today’s pain – post-waxing by about twelve hours – is worse than the pain I experienced during the actual waxing. I had hoped that the redness and irritation would subside, but if anything today it looks brighter and worse than last night. In fact, I’d be more self-conscious about going to the beach right now all red-prickled and mottled than I would as my former follicled self. I just hope my skin returns to normal before Sunday.

The pain I have now is more like a bunch of little pinprick needle sensations, as well as just a general sensitivity over my entire skin. Unfortunately I have a little dark red dot where each of my trillion hairs used to be, and my skin is hot to the touch and raised and mottled red in large swaths. I’m not sure if this is a rash/reaction to the wax, or just my skin reacting to the trauma, or a little of both. Either way, I’ve got crossed fingers for it to fade prior to getting poolside come Sunday.

And that’s it. Next time I’ll write it’ll be from the tropics. Take care internet.

Oh… you want pictures?! I’ll post some later today when I have time (that’s my shoulder up there accompanying this post). I’ll try to get the worst of it (how it looks now all red and pokey) and maybe follow up with a hopefully much less irritated “after” pic from Aruba.