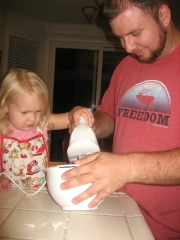 Monday night and what a welcome end to a long day.

Began around 7am when my boss called me from the airport.  I mean, I’ve not even made it into the sawmill yet and here I am listening to my boss in my ear as I fart around the house getting ready to go.

Yeah, I know, I’ve got to do more work with less people and less money.  Fix what went wrong on the last project but make absolutely no changes from the way they did things, uh-huh, right.  Sure, no problem.

I couldn’t even give Keaton a proper kiss and hug goodbye for holding the phone up to my ear to promise I’d “run some numbers” and estimate what might “fall off the plate” if I didn’t “get any upside” in first-quarter 2009.  I’ll tell you what’s gonna fall of the plate man… my faith in the fact that things can change… that’s what.

On top of this I’m buried in unread mail when I finally get to sit down at my desk.  Four-hundred bold-font missives stare blankly at me from my monitor… each of them threatening to make me think, make me do something.  I start to group them by subject, weed out the crap, the mile-long thread where thirteen people thank each other and reply with useless one-word statements like “OK” or “Sure.”  Past the near-ten pieces of corporate spam telling me they’re resurfacing the parking lot in front of building F or that the servers that run the Coke machines will be down for servicing Saturday night from 3am-5am.

Man, I could care less.  Is this where I landed for real?  I mean, I slept in a lecture hall one night in college we stayed studying so late.  We ordered pizza to the building, snuck in after the cleaning staff left, studied until 5am, slept on the floor until 7am, and studied again for an hour before the class began at 8am.  I worked that hard for this, eh?

I know, I sound sour – but I’m really not in that bad a mood when it comes down to it.  I guess I’m just in one of those moods where I want to stay in bed all day with Keaton and Sharaun.  When I got home, I put on some new music (an amazing series of rare 60s American “Northern soul” compliations called Talcum Soul) and played teaparty and “river” with Keaton.

And, after dinner I decided to have her help me bake some banana bread while we listened to the new Of Montreal (Sharaun took pictures).  So maybe the lyrics aren’t exactly the best for a two-and-a-half year old, but at least they don’t really swear… they just talk about “kicking it softcore” and “taking it both ways.”  It’s cool, she’s not listening anyway, she’s all tied up in cracking an egg into our banana-batter and licking the mixer/beater things clean when we’re done stirring things up.

Mmm… I’ve dried up.  Nothing left to write.  Let’s paste on this little closing job I did sometime earlier today when I thought I was gonna write this whole thing but didn’t.

Well folks, the LHC (which I’ve written about before) is coming online tomorrow.  Y’all ready for the Eeath to asplode?  I’m not.  In fact, I just sent out the invitation to our Halloween party… so I’m banking on at least another month or two of Earth, K?  K.

Oh, and I know I’m once again behind in getting new pictures of Keaton up… so to tide you over here are some new pictures Bill posted on his lil’ corner of the web, as well as one here from pro-photog Maygsters.

One Reply to “baked away the day”