Don’t tell anyone, but I skipped out on an afternoon “teambuilding” event for work today and came home instead, to “yardbuild” alone. I needed to mow, and wanted to try and give the empire-building crabgrass a little bit of the business. I went mad, a little bit, I think. I mean, I just got so frustrated I started ripping up crabgrass, uprooting the stubborn creeping weed with a trowel, and leaving massive bare spots in my yard in the process. It’s OK, the grass was already dead there. My yard has gone from what was arguably one of the best-looking on the block, to one of the worst-looking. If I were just a tad more vain I’d consider paying to have the whole thing uprooted and re-sodded. But, in the end, it’s just grass… and I realized today that there’s no way to beat the crabs… I pull up a whole colony only to find that it’s sprung to life in another corner of the yard. So, I had a moment of realization, standing there in my patchwork yard, and decided that I can be happy even if I have an ugly lawn. Even if it’s all crabs, it’s still green.

Today when I came home from work (at noon, bwahaha!), I was kinda hungry and I started rummaging through the house for food. Well, the kitchen at least. Threw away a loaf of moldy bread that had been out since before this weekend’s Oregon trip, looked at the bleak offerings from the fridge, and moved onto the pantry. Upon opening the pantry, I was greeted with the strangest site: 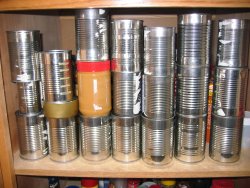 A wall of labeless cans glaring out at me. What the heck is this? I picked up a can or two to see what in the world was going on, but was even more dumbfounded when I noticed that each can seemed to be hand-numbered in permanent marker. I checked a few more, and they all had numbers written on the bottom in marker. Now, under normal circumstances I would’ve found this whole thing to be extremely odd. However, living with a teacher, you get used to strange things being left around. I figured that it must be some project Sharaun was working on for her class, maybe some kind of recognition or memory thing… I dunno. The thought of a “list” somwhere that matched each numbered can to a description of its contents made me laugh a little – but I soon forgot about the cans after a nice tuna sandwhich (tuna from a pouch, no can needed) and half an hour of Cops. 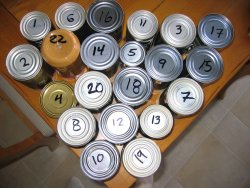 Later, Sharaun called on her way home from school and asked me to check some ingredients for our planned dinner. When I went to the pantry, the cans reminded me to ask her about what kind of “project” they were for. Turns out, she had no idea what I was talking about. In quick order, I deduced that we had been hoodwinked. Someone practical-joked us, and now all our cans were labeless and their contents a mystery. What’s worse, Sharaun needed some chicken broth and green beans for dinner. Luckily, she’s familiar enough with the chicken broth cans to pick them out – but our jokester had even thought of that. Any can with identifying info on the top or bottom had been blacked out with marker… ingenious.

Oh, whodunnit? Well, if the engineer-sevens (y’know, those Euro-techy sevens with a little horizontal line in them?) weren’t enough of a tipoff – the fact that I loaned my housekey to Pat this weekend while we were in Oregon sealed the deal. Really, you think you’re doing a nice thing by letting friends mooch off your ESPN GamePlan… sheesh.

Hi David, I read your blog today and I would like to offer you my view as a Viet Nam veteran of what I think of the war as I look back after 30 years. Thirty years ago I was on the flight deck of the USS Coral Sea helping my ordinance buddies load napalm and 500lbs bombs. We lost many fine young men (two of them were my squadron’s commanding officers) who flew off the flight deck and never returned. These were men who I worked with, talked to, and met their wives and children on R&R. David if the war had not started when I was on the Coral Sea I would have went to Canada or Sweden after I found out what the United States was doing in Viet Nam.

I read Oliver North’s letter and I can’t understand his position. He says, ” Worst of all, John, you then accused me — and all of us who served in Vietnam — of committing terrible crimes and atrocities.” This statement is blatantly false, a lie if you will. John Kerry never accused everyone who served in Viet Nam of committing terrible crimes and atrocities. He stated the facts and some who wanted the war to continue don’t like the fact that atrocities were committed by US troops. Take a look at this and make up your own mind, http://quivis.com/tigerf.html.

If you, like Ollie North, can support this method of fighting a war, and justify it, then vote for Bush. If you don’t believe, as I don’t, that there is any justification for My-Lai or the murder of innocent civilians, vote for Kerry. Love you, your Paw.

And then, followed up 15min later with this:

Hi David, I was just looking at this letter I wrote you and I noticed it was 40 years ago, not 30, that I was in the Gulf of Tonkin helping give the people of South Viet Nam freedom and democracy. I was 24 years old, the same age as your brother John who is probably going to be going to Iraq to fight another war to give the people of Iraq freedom and democracy. I have never contributed to a political campaign before David, but I have sent a contribution to the Kerry campaign as I feel this is probably the most important election in my life. Love you, your Paw.

Hmm… I don’t even really have much to add or comment. I respect my dad’s opinion a lot, even if he can’t remember how many years ago he was in Vietnam… I mean, he is getting old and all. Thanks for the notes pop.

Lastly, I finally got a Gmail invite… so I now have an account. Yeah, so, I wasn’t really on the bleeding edge this time – but that’s cool. Now I just need to figure out who gets my invites.