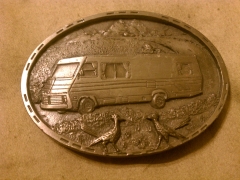 Two Mondays ago I trimmed my beard for the final time before our big trip.  When we get back, it’ll be with some eight weeks of growth hanging off my face.

I don’t mean shaving (or, perhaps “shaping,” better put).  I’ll still shave, both my head and to shape my beard the way I like it – I just won’t go over the whole of the growth with clippers to keep it to a certain length.  So it won’t be entirely unruly, but it will probably be very unattractive.  I don’t grow a good beard; I’m missing the upper-lip and goatee areas… just don’t grow there.  So what I can do is what I can do.  There is something… manly… or primitive, about not shaving (OK about half-shaving, in this case).  There’s a Crosby, Stills, Nash, & Young song where David Crosby talks about a hippie guy who’s considering cutting his hair.  In the song, obviously enough called “Almost Cut My Hair,” Crosby says he didn’t cut his hair because he feels “like letting his freedom flag fly.”  I like that.  In my case though I’m more like unfurling my freedom shag (supposed to be a carpet analogy).

I know I will likely look ridiculous, but I believe this is an essential part of this third-life crisis.  Not only will I wear a belt buckle that has a picture of an RV on it (no, really, Sharaun and Keaton bought me one as a gift – it’s the featured image alongside this post) and a leather cowboy hat, I will be sporting an unruly beard to boot.  In my head this is my road persona… some dust-caked nomad tumbling over hill and dale and stopping for club sandwiches in forgotten diners.  Except I’ll be toting my family along with me, a clean and well-manicured suburban unit which’ll no doubt appear mismatched with my shabby disarray.  OK, OK, I admit… the whole “dust caked” and “shabby disarray” thing is only the glam in my head… people will see me as yuppie-Joe hiding under facial hair and affected accoutrement.  But who cares!

One Reply to “last trim till july”