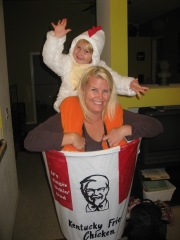 Halloween has come and gone.

We had our usual party.  It was well attended and fun.  The costumes were great.  The next night, Halloween proper, we got together with a few close friends and took the kids trick-or-treating around the block.  I also fired up the fog machine, strobe light, and scary music while I handed out candy.  A neat story came of this, read on.

At one point, while I was out trick-or-treating with Keaton, a friend stayed back at the house to hand out candy in my stead.  While he was there, a young girl braved the path to our door.  As happens with some of our ‘treaters, they get a little scared and edgy by the time they’ve navigated around the pop-up coffin, an animated witch, and a hovering ghost – and by the time they get to the door it’s a testament of will that they’ve made it.  And then, just in time, a skeleton drops from the ceiling above their heads with a loud ooga-booga noise.  For this girl, it must have been to much.  Bill, the buddy covering candy-distribution while I was out, said she turned and ran as fast as she could into the house.  Too bad the screen door wasn’t open.  She ran right into it at full speed.  Man, why couldn’t that have happened while I was there?

I’m afraid that, tonight, I don’t have much for the blog.  I spent most of Saturday nursing a hangover and cleaning up the aftermath of Friday night’s party, and then after church Sunday I killed the afternoon taking down and storing the Halloween props for another year.  Both days were long and made busy with the work of the hands.  But, the house is back together and things are as much in order as the ever are.  So, not much writing… but, I did find time to upload the costumes from the Halloween Bash to get the voting started.  So head on over here and cast a vote for your favorites from the evening.

Yes, Halloween has come and gone; and now it’s time for Thanksgiving and beyond that, Christmas.  That