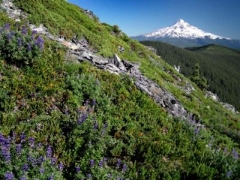 Had all gone as planned, my brother and I would’ve hiked down from the heights of the gorge today after three days in the wilderness. As it happened, though, we managed to trek the entire thirty miles in two days, and made out exit yesterday evening instead. Finished a day early, and unwilling to pay the money necessary to change my flights home up a day, I managed to have a whole extra day in Portland. Turned out to be a good thing; time to rest my over-sore muscles.  Portland always seems to have something going on, so I hobbled out with my folks and brother to the local Polish festival for some Polish food, drink, song, and dance.  Not a bad way to spend an unplanned sabbath with family.

As for the hike itself, what a brilliant trip.  I’ve never hiked up Oregon way, and being broken in along one of the Gorge’s most popular trail was a grand entrance.  Out thirty miles took us up the Eagle Creek Trail to Wahtum Lake, where we flipped our steady ascent and headed back down to the Columbia via the Pacific Crest Trail.  A few miles into that and we veered off along Ruckle Creek for a massively steep descent.  We camped over night a few miles below Wahtum Lake at a beautiful spot alongside an unnamed creek just off the trail.  In Oregon, unlike most places in California, you’re allowed fires at night – so we built a nice warm one in a ring of rocks and sat around it drinking port from our hip flasks.  The first day was easy, the second day was insane, but partly because we pushed ourselves to finish early.  Altogether, it was a great weekend in-country with my brother… one of the coolest things I’ve done with him since our days playing Star Wars in the backyard.

Anyway, I gathered some of the better pictures I took along the trail and am presenting them here for you.  Check ’em out by moving your eyes an imperceptible bit south down this very page…

And now… with the hour getting late and me still having to pack before catching a 5am train to the airport, I must bid you adieu.

3 Replies to “going up the country”