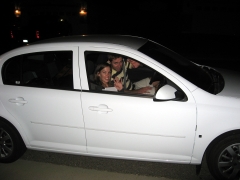 Back from Oregon.  Up at 4am to catch the train to the airport, I tried to build a “better” public transit schedule to the airport, ignoring the trains and times the website recommended and instead “discovering” a better route on my own, buying myself another half hour of slumber.  All worked well until the train which, just ten or so stops prior, had been marked “Airport” instead changed its destination sing to read “Not In Service.”

It was right around then that they kicked me out.  Miles from the airport, I asked the conductor who was turning me out why the train was no longer bound for the airport.  “Another train’ll be along in a few minutes,” was all I got.  Fifteen minutes later I boarded that “another train.”  Long lines at check-in and security found me sprinting (on dead-sore post-hike legs) to my gate, where I managed to board just before they closed the door.  Whew.

Common sense says I should be tired; should maybe be in bed already.  But instead I had all this nervous energy I had to vent.  After landing I went and got a haircut, then went into the office for the afternoon.  After that I came home, unpacked, cleaned the garage, and transplanted Pat’s hops into my backyard to tend while he’s away.  Our friends Pat and Cynthia were over, spending their last homeless night in the USofA eating dinner and waiting for their departure amongst friends.  Around 9pm we walked them to the car and waved goodbye, and they drove off to a new life in another country.  Before he left, and even though it started out as a handshake, I gave Pat a real hug.

A busy week ahead, and I’m all alone with Keaton for the last bit of it.  Sharaun’s off to Florida for a bachelorette party and it’s up to us to fend for ourselves for four whole days.  Payback, I suppose, for my weekend hiking in Oregon perhaps. I’m sort of excited about playing Mr. Mom, being responsible for every moment of the day… and then I also feel daunted by the task of doing what Sharaun does with Keaton.  I guess I can think of it as training for the weekend of the actual wedding… which is also this month.  Hat’s off to the guys raisin’ they kids, huh?