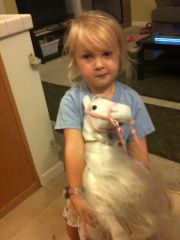 It’s Tuesday, right?  OK no, you’ll read this on Wednesday… but it’s still Tuesday for us right now.  Sharaun’s at volleyball and Keaton and I are here giving the freshly-leaked Islands record a spin.  We’re withholding our judgment right now; we agreed we need to get through the whole thing at least once before we form any opinions.

Recently, a young girl at church heard about Keaton’s weekend pony ride with Grammy & Grandpa and decided that she’d make a gift to Keaton of a rather large toy pony she had from when she was an even younger girl.  Now, when I say “rather large” I’m meaning the word “rather” plus the word “large.”  Yes, this is a pretty big plastic pony; the thing has heft, a respectable weight to it.  It’s so big, in fact, you could mistake it for an actual ride-able pony (a toy ride-able pony, but a ride-able pony due to its stature alone).

The thing had appeared at the house when I got home from work today, and Keaton couldn’t wait to show it to me.  “Look dad,” she barely contained, “Look at my big pony!”  “Wow,” I said, not having to feign, “She’s beautiful.  What’s her name?”  “Luna Alice In Wonderland Princess,” she replied, matter of factly.  Yes, that’s her name; that’s what Keaton named her.  To clarify, she’ll add “‘Luna’ is her first name, ‘Alice In Wonderland’ is her middle name, and ‘Princess’ is her last name.  Did you hear me dad?  Are you looking?  Look with you eyes please.  Dad.  Dad.  Dad did you hear me?  Are you looking?”  Oh man I wish I could freeze her for a little longer than a year to get a little more than a year with her every year; she’s that fun sometimes.

A confession: We’ve lived here in our modest first-home now for about seven years.  Not once during this time have I ever cleaned our windows; inside, or out.  Never.  To look at the windows, you would surely know this.  The tracks and grooves which they sit in are dusty, dirty, and strung with cobwebs in the corners.  Now, I don’t mean to say our house is the picture of disarray… quite the opposite, I think , if one were to drop-in and perform a quick visual check for cleanliness, we’d pass muster OK; clutter aside.  But upon close inspection, the white-glove kind of inspection, oh the neatness-police would find plenty to fine us for.  I was thinking about washing the windows, inside and out, this weekend.  But… then I thought… “It’s gonna rain soon in this year.”  So I changed my mind.

Ohhh… Sharaun has the Biggest Loser on.  It’s the first episode of some new season, the one where I like to try and guess which of the fatties might be hot once they lose 250lbs.  Gotta run.