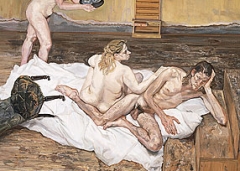 I’m off again today, taking the corporate sawmill shuttle across the state a ways to work over there for a couple days.  More of the “meet and greet” business, with a little effort thrown in to justify the whole thing.  So, an evening in a hotel and two days away from the fam… could be worse I suppose.

I’m just dreading the 4:45am rise-and-shine… which means I better get to typing here – I got music and Halloween for you today, not much to write home about.

Lately, I’ve been on this soul music tear – acquiring (through absolutely unquestionably legal channels) tons and tons of vintage 60s and 70s soul records to try and flesh out my collection. In the process, I’ve found some simply amazing stuff – the cream of which so far has got to be material by one O.V. Wright. Someone I’d never even heard of before, it’s hard to believe this guy isn’t held in the same esteem as classic performers like Otis Redding and Marvin Gaye. His voice is incredible, full of emotion, and his songwriting isn’t so serious that you can’t get a chuckle here and there. And the music, oh man the music. All the right horns and cymbal crashes in all the right places… this stuff makes you feel.

Anyway, it’s just the tip of the iceberg. Some seventy albums into my bender, I realized I’ve now got too much to appreciate before something new comes along – and I’d better come up for air and actually take in some of what I’ve grabbed. Soul is a relatively new area for me, so I’m excited to get educated. I know, you’re riveted right no.  I’ll continue to thrill you with the following, I’m sure…

I was thrilled today as I came up with a really neat concept to “soup up” the Halloween prop setup. Right now I’ve got live power (at 120V AC) running all around the place to power the props. I’ve long worried about this being unsafe, as a lot of my connections are simple wire-nut jobs and could conceivably be susceptible to shorts (and, less plausible but still a concern, human contact). Today I hit upon a way to move most of the dangerous high-voltage hookups under the safety of the front porch roof enclosure – and wire the props in the yard with low-voltage 12V power.

Additionally, I dreamed up a way to reduce the amount of clutter I have by triggering the coffin “popper” and ceiling “dropper” from the same motion sensor. I know it doesn’t sound like much, but to me it means a lot less wiring, a lot cleaner interface between the props, and some cool new features. For instance, both the dropper and the popper can have (timed) associated sounds and targeted lighting now, in addition to the always-on “ambient” soundtrack that was there last year.

What’s more, if everything goes right – in addition to springing down on you from its hiding place above with a blood-curdling scream and scary spotlighting, the ceiling dropper will now spray a burst of fog towards you as well. It’s probably hard to visualize, so I’ll just post a video when I get it working.

Ahem… I’m outta here.  With such an early start to tomorrow, the sheets and pillow are calling.

Before I go, I keep meaning to mention that Ben posted his pictures from our abbreviated John Muir Trail hike over at his site.  Check them out here.