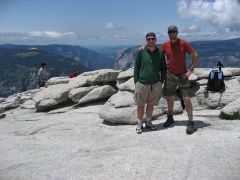 Back from Yosemite, and with Monday as vacation it’ll be another abbreviated workweek.  And, due to some scheduling oversight (or not, I forget) we’re off camping again this weekend.  It’s cool; although I do miss having a weekend at home to actually do some things (or no things, for that matter).

The trip was fantastic.  The Sunday Half Dome hike turned out better than I could’ve hoped.  The weather was amazing, the trail wasn’t overcrowded, and I felt great the whole way.  We got a late start, arriving at the trailhead about a quarter to seven in the morning.  The crew made good time for the first seven or so miles, bringing us all from the valley floor at about ~4,000ft to above the treeline at about ~7,800ft to the east of Half Dome on the famous trail.  At that point, some threatening clouds had begun to ring the valley, hanging above the granite walls that rim it, and there was an increasing amount of separation amongst the crew.

Worried at the weather, and with Mike and I still feeling relatively fresh and strong, we made the selfish decision to push hard for the summit and leave the other three behind.  I felt a little bad about it, but we tackled the exposed part of the hike to the saddle before the cable-climb with such vigor that the thought soon left my mind for the burning in my calves.  We had agreed that we’d make a gametime decision at the base of the cables, based on how the clouds looked – and, when the time came we opted to go.

The cables were crowded and the ascent took much, much longer than I’d have liked.  Without having to hold up for all the slowpokes and panickers, I really do think Mike and I could’ve pressed to the summit in fifteen or twenty minutes; but, as it was it took us more like forty to get to the top. Once there we ate the Lunchables I’d hiked up to refuel, took a couple pictures, and rested just a bit before heading back down.  After another twenty minutes waiting in the queue heading down we were on the granite steps again and, before too long, on our way out.

All told the ~17mi trip took ten hours, and I haven’t felt physically better on a long hike, ever.  My legs were fresh longer than ever before, and, even though I started to crash at one point on the descent I was able to pull out of it with a Cliff bar and some good conversation.  Mentally, I like to attribute this to my new weight loss and increased stamina – but that makes me feel somehow arrogant.  But, it sure did empower me along the way.

I love that hike.

And, as for the non-hike part of the trip – we had a great time with friends.  Our little tent cabin in the valley was cozy and the camp meals were delicious as always.  In fact, the post-hike pizza and beer were about as fine a meal as I can recall having in any recent time.  Keaton had a blast playing with Gracie and even got to do a hike of her own the day we did Half Dome: All the way to the Vernal Falls footbridge (which is, honestly, quite the accomplishment for four women, two three year-old girls, and an infant).

So yeah, Yosemite was great.  I’ll post some pictures soon (including a long-overdue update covering the last few months – I promise).  And now, back to work tomorrow and I don’t want to go.

I don’t want to go.  Goodnight.

2 Replies to “back to reality”