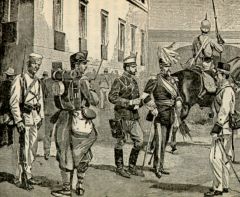 Sorry for no Monday entry.  Sunday I spent the post-praise day working on the Halloween props, and with dinner guests that evening I found not a common moment between me being awake enough to write and me wanting to write.

Anyway, the props are about 80% ready – still some wiring and cable-tacking and fine-tuning to do before everything’s perfect.  Of course, setting things up wasn’t with out issue, and I found myself frustrated and pressured by some imagined deadline.  I’ll be happy if I get everything dialed in this week, and then can spend some time working on the “new” prop to see if I can get that working before the 31st.  I’ll let ya know.

I’ve really got little to post today… but I did want to share a little bit of why our daughter constantly amazes me.  And yeah, I guess this is sort of dad doing some bragging… but…

See, she’s got this little “music table” toy that sings all sort of songs.  It’s actually from when she was little, but we keep it around because she still enjoys it and it’s good for our friends with cruisin’ babies.   Anyway, the thing sings counting songs and the alphabet – and does both in English and Spanish according to how a little switch on the side is set.  Apparently, Keaton’s been practicing her alphabet in Spanish.  Check it:

[audio:alphabeto.mp3]
Better than I could do.

Oh and because I’m so behind in updating Keaton’s gallery, Megan posted some new pictures of Keaton (and one hilarious one of yours truly too) – and Bill posted some of Keaton and Jake from our first debate-watching party (yes, we’re old) – and Ragan posted some from when they visited.  Go check them out here, here and here, respectively.  Thanks for doing my work, folks.