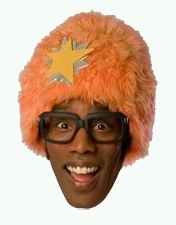 Happy Tuesday night friends. Today at work I took the liberty of blocking off the 10am-12pm slot on my calendar for the remainder of the week. I plan to use the daily two-hour escape to complete all the remaining work I have to do around our annual review processes. As someone who has to be responsible for ranking others, I hate this time of year; but as someone who himself gets ranked against others, I actually look forward to succeeding. But, I don’t want to talk about it now… because I came home from that awful place to get away from it, at least the night is still mine. For now…

About a year ago, I read on a friends’ blog that their daughter was into the show Backyardigans, which is a computer animated kids show on cable that has a bunch of friends use their imagination to have adventures Muppet Babies Rugrats kinda theme. The twist being that all the adventures the crew has are set to original music, each show tending to have a musical theme in addition to a storyline.

I liked it so much I started TiVoing episodes for Keaton, and it’s become on of her favorites. And, actually, I’ve really come to appreciate the music that goes along with each half-hour. The songs are well-written, enjoyable as “real” music, and often infectiously catchy. And, while I don’t think she’s ever actually sat through an entire show (she’s just not much for the television), we enjoy watching snatches of it together.

Well, today when I got home from work and Keaton asked to watch “Yaganins,” I saw the lightbulb flick alight above Sharaun’s head. “Oh,” she said, drawing out the word for emphasis, “I want to show you something that will blow your mind.” Firing up the TiVo and scrolling down to the Backyardigans, she highlighted a new episode called “Tale of the Mighty Knights.” Now, there’s a pretty finite number of these shows, and I’m fairly certain I know them all, so the title was new to me. Turns out it’s an hour-long special episode, done in the style of a 1970s prog-rock-opera. And since knights and dragons are the stereotypical storylines of epic rock music, it’s the perfect genre to accompany the story.

Anyway, I was curious, and with a little research and I’d uncovered the interesting backstory on the guy responsible for the show’s tunes, Evan Lurie. And… that linked article is the whole reason I wrote those previous two paragraphs. Hey, with heavily musical shows like the Backyardigans and Yo Gabba Gabba!, Keaton and I can both have a good time watching Nick Jr.

Goodnight, and act your age.

3 Replies to “the night is still mine”