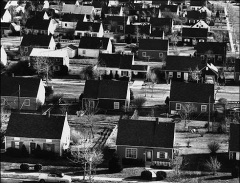 Tonight, I took Keaton to the suburbs.

No, seriously, it was awesome. Around 7pm, I decided we were going to go for a walk. I got together all my baby-walking gear (bottle of water, sippy of juice, long pants for Keaton in case it cools off before we get home, and the iPod for dad), and we struck out. I decided we’d walk over to see Pat & Cynthia, friends of ours who live nearby. It was a great walk, we passed people waving from trucks, fatsos jogging off college and Big Macs, skinnies jogging because they “enjoy it,” and were even serenaded by a highschool girl practicing her flute on the porch. It was perfectly pastoral: manicured lawns and American flags in the sun, music wafting from open garages where men tweaked their “project” cars, wanna-be longhairs skateboarding around in the cul-de-sac – like walking through some sort of modern-day Mayberry.

On the way back, after some make-nice at our destination, we retraced our steps, now in the shade of the trees and houses as the sun slipped away towards eight o’clock. About two-thirds home, I saw a man hugging a woman on the curb. She craned and kissed his cheek, he said something I was too far away to overhear, and she walked off across the street to her car, fumbling for her keys in her purse while the man just stood and looked on. As I neared, I greeted him, “How ya doin’?” He looked at Keaton, smiled, and replied, pointing across the road towards the girl, “I can remember when she was like that.” I laughed and bent close to Keaton to jokingly say, “Don’t you ever grow up like that, OK?” “Bye-bye,” she replied (as she often does). The man and I shared a laugh, and we walked on. Yeah, then the “Beatles'” remake of Lennon’s “Real Love” demo came on, y’know, the one from the Anthology series… I totally almost cried.

Today, I took I “longish” lunch (again, I have this sense of entitlement about deserving a little “break” from work these days) and went to a local steel place with Anthony. We were pricing out the metal we’d need to build me a “Santa Maria style” pit barbecue. I’ve written about my fascination with these types of “old school” grills before, and had been planning to buy one in preparation for the Summer this year. Lately though, I began thinking about just how simplistic the things are in construction. I floated the idea to Anthony the other day that we could likely make one ourselves on the cheap.

See, Anthony not only has the tools, a plasma cutter and welder and various others, but he’s mechanical. So, in essence, I asked if I could help while Anthony makes the thing – knowing full-well that he’s always looking for excuses to use his gear. Plus, I want to take the chance to learn how to do some simple welding and cutting and metalwork. So, we drew up some plans, mostly based on this BBQ, and calculated what we’d need. About $150 later, we’d picked out all our material and were paid up. We’ll go back and pick up the goods on Wednesday, after it’s all cut from stock and set aside for us. Then, we’ll go to work. With luck, the thing could be done in a weekend or two. Now to get some high-temp paint, find a source of aged oak, and I’m good to go.

Well folks, that’s about it for tonight. I have dishes to do and I’m right up against my 9pm blog-stop deadline. Have a good one, goodnight.