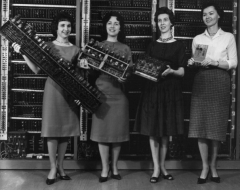 A weekend of firsts: First night away from home with little Keaton; Keaton’s first camping trip; Keaton’s first time to the ocean; and Keaton’s first night slept entirely through (she’s been doing ~6hrs for about week, but Sunday night she went 11 hours – in a tent no less). Camping was good, but freezing – windy and in the low 50s / high 40s at night. We bundled Keaton tight, and she really seemed to enjoy being outside. Laying down in the tent must’ve seemed like a circus-colored light show to her, with the wind blowing the canvas walls in and out and the sunlight playing through the trees we were pitched under. I’ve posted the Keaton-specific pictures from the trip in a new gallery, and the more general camping-related pictures in another new gallery – go there or be square.

Speaking of galleries and pictures, I made some simple optimizations to my Coppermine gallery script (the machine behind my photo galleries). I’d had problems with slow loading and updating, and most annoyingly I was getting SQL “max_questions” exceeds errors (seems Coppermine is pretty liberal in the number of SQL SELECT statements it does, and my server limits me to 5000 per hour). I actually think it’s Google’s robot spidering the images that was constantly pushing me over the limit – but regardless of the culprit it was annoying to have the gallery go down for an hour at a time. I added a brilliant bit of randomization to the SQL user, so the gallery will run the SELECT statements with one of four different users each time, randomly. This way, I can effectively have 20000k queries per hour. What’s more, it seems to have greatly improved the speed of the galleries – maybe by deserializing all the queued SELECTs from a single user. Either way, it seemed to be working well over the weekend – but I did get a couple slow loads… we’ll see how it works under the “strain” of all my readers.

Tomorrow, Monday as I write, is gonna be a busy one. Unfortunately, I had to cancel this first of my two much-looked-forward to Lasik consultations… to schedule some last-minute meetings at work. Things were thrown into the air at work Friday, as some major shakeups went down. So much so that my planned travel this week is now up in the air, which is tough because I was using the trip to Oregon to get to my folks’ place for our Mother’s Day visit (Sharaun is meeting me there Wednesday). Now, however, I don’t even know if my work-related travel is still on – although the trip to the grandparents’ place still is, meaning I may have to find my own way there… which may or may not be on the same flight as Sharaun and Keaton. Not a big deal, it’s just that, me being anal, I like to know how I’m getting where I’m going – especially when it’s Keaton’s first plane trip. It’ll work out I suppose.

Three songs from the to-be-released new Radiohead album leaked in live form this weekend, from a recent Thom & Johnny outing – and they’ve got me salivating for this thing. Also, tickets for the show at Berkley’s Greek Theater (a short jaunt for me) go on sale next weekend… and I’m just dying to find a way to go. Too bad I’ll be out of town the day they go on sale, as I know I stand no chance online and the phones will be jammed. I’d love to see them again, any chance I can get really… maybe Sharaun and I can hire a babysitter… or I can take a night off and head over with someone of similarly excellent musical taste. Maybe… just maybe…

Blogging this week could get sparse, as we’ve got more firsts for Keaton which may end up taking precedence: first trip on a plane, first time meeting grandpa on dad’s side, and mom’s first qualifying mother’s day. Until tomorrow, take care out there in the real world… and we’ll do the same here at sounds familiar.