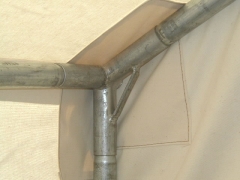 Sunday night and, after a weekend spent cooking over a Coleman stove and warming frozen fingers in front of a campfire, I’m not at all looking forward to waking up and going to work. It was a good weekend though: eating the campground delicacies afforded by car-camping, walking with Keaton on the beach, and our little family huddling close in the tent to make the cold night a little more comfortable. Compared to stuff like that, work pales.

Now, since it’s Monday, you know I’ve got a new batch of photos uploaded to Keaton’s gallery. Including candids from camping, bathing, and and college football Saturdays. But, I’ve also got a new little tidbit of Keaton-news. Try and contain your excitement, but she’s finally cut her first tooth. It’s barely through, but it’s there. We tried tonight to take a picture tonight, but getting her to hold her mouth open isn’t an easy task. Anyway, it’s crazy how quickly she’s growing… and I just know she’ll be crawling around any day now. It’s too fast, really, it’s going waay to fast. Without going back and looking through photos from a month ago, it’s hard to even remember how different she was.

I know, Lonelygirl15 is over. I mean, she was interviewed on CNN, she made an appearance on the Tonight Show, she’s was on TRL for pete’s sake. But guys… and I know I swore never to write about this again… but guys… this cassieiswatching alternate reality game spinoff is really heating up. After watching the latest Cassie video, a freakish inverted creepshow featuring overt references to the murderous cult of Charles Manson, and which was also shot at the exact same locale as the last LG15 vlog.

The ARG professionals over at unfiction have arleady solved the first an second cassieiswatching videos (after they recovered items left at the same locations of LG15’s videos). The latest clue revealed a phone number and a cryptic voicemail, and I won’t bother documenting it further than there. So far, the “official” LG15 creators are denying that the cassieiswatching ARG (if that’s what it is) is part of what they’re calling the “Breeniverse,” but to me – it would be a spectacular plot device to start the LG15 videos, stage a fake “outing” of the cast, but have it all be part of the grander screenplay. An intricate ARG, of which the whole “LG15 is fake” thing was just an act.

In the “kinda freaky” department, they are building a Tolkien-inspired community near Bend, Oregon called the Shire. I wonder who will live there? Seriously, check out the video… incredible.

Goodnight folks, I love ya.