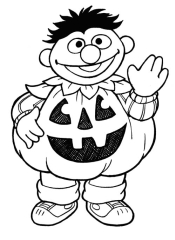 Thursday night. The ladies, including Sharaun, went out to have some drinks and talk about shoes and calories and Suri Cruise and shit like that. Meanwhile, back at the Bat Cave, the women suggested the abandoned men come together and have a night of bonding they could call their own. Man bonding, however, doesn’t really involve talking. Just TV watching, a case of Budweiser Select, and a 40-pack of Pizza Rolls. That, and, dad was left to get Keaton down – so I’d wager the women were able to cut loose a little more than our neanderthal-moot. But, let’s get serious y’all, how fun can cutting loose be when it’s comprised of Appletinis and gang-gossiping?

Is it me, or is Halloween now much more merchandised than I remember it being as a kid? I’ve been obsessed with Halloween since I was a kid, but I don’t remember it being anywhere near as commercialized as I see it today. Nowadays, come September, Halloween mega-stores pop up all over the place. They’re full of high-dollar assembly-line form-pressed scare-wares, fake blood and costumes galore. We had nothing like this when I was a kid. We went to Kmart and walked down the one costume aisle; the same aisle where, if you were lucky, there’d be a squeeze tube of fake blood left, and maybe a spraycan of hair color. Don’t get me wrong, I love the new Halloween, love the “made in China” 500% markup props strewn about suburban lawns.

Heck, I remember my brother and I stuffing a pair of dad’s old pants and a long-sleeved shirt with newspaper and old towels. We’d cinch a masked basketball to the stuffed torso, smear the whole thing with fake blood, and hang the whole thing from the basketball hoop. It looked great, right down to the tied-on shoes pretending to house feet. We’d stuff another dummy all broke-bodied into a plastic trashcan, not have light on either when the big night of trick-or-treating came around, and be absolutely giddy about the whole thing. I still like that “pioneer” style Halloween moxie, still like trying to create my own tombstones rather than buying the bulk ones from Target. To end this mess: I’m just glad Halloween is gettin’ the respect it’s so rightly owed.

Tomorrow if Friday, God-blessed Friday. I’m leaving early too, to head out to the coast for a weekend of camping. Since it’s family-style car camping, the normal rules of “primitive” camping are thrown out the window – and we’re free to haul in the big tent, air mattress, and coolers full of beer. Not only that, I can bring the iPod and portable speakers, and Erik’s bringing a small black and white TV so we won’t be college football deprived. I’m looking forward to huddling around a daytime fire to cut the chill, perpetually sipping a beer, and squinting to watch the action on the pitch. Good times.