Another day. Thankfully, work went by fast enough and relatively painlessly. Now it’s already 11pm and I’m just starting to write. Won’t be a long entry tonight, but at least I have some media to post – which in my mind somehow makes up for a lack of verbiage. Here we go.

As work has been moving forward on the Halloween props, I’ve been spending a little time at each big phase thus making little “teaser” videos for this year’s haunt. It started with the witch’s test flight video the other day, but now I kind of like the idea of creating a series of short teasers for the props and whatnot – it satisfies the nerd within me. So today I whipped up one from the footage Ben took during our lunch-hour test of the new fog machine. Watch it by clicking this sentence. More teasers to come, stay tuned.

Anyway, we got together tonight to work on the Winch Witch. Keeping with our run of luck and productivity, we completed the entire costume portion of the prop, and she now looks like a full-fledged witch. We were also able to do a couple “real life” tests of her drop path from the roof, to judge speed and crap. I think she came out looking pretty dang good, judge for yourself: 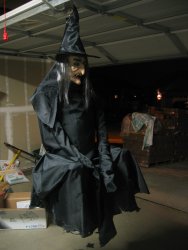 I installed a new script on this page the other day that let’s me see when people visit. Since my readership is pretty limited, I can, for the most part, know who is looking at the page, when, and how often. It’s really cool in a voyeuristic kind of way, and there’s always those tantalizing IPs that I don’t recognize, which just fuel my thoughts of closet readers. I guess I need to start spicing up the entries, or providing some kinda service, if I want readership to increase tenfold or something. Owell, I’m cool with writing for writing’s sake.

That’s it all, I’m tired and out of junk to say. Watch the video again or stare at the picture, they’ll have to take the place of the words that aren’t here.

Man, I am so angry right now. The fact that I’m writing this postscript to last night’s entry can vouch for it. I dunno man, the insurance industry must have gotten together and realized we hadn’t paid them a deductible in a while or something. First, Sharaun injures her knee playing soccer. Next, her windshield cracked top-to-bottom this weekend when she was washing her car (hot glass, not-hot water). And finally, shortly after leaving for work this morning she comes back in the house sobbing that her car’s been broken into. Damnit! I absolutely hate car break-ins. She had parked it outside last night because Ben and I were taking up the garage working on the witch project.

Anyway, one night outside – one night! Looks like they tried to slim-jim the door first and then either gave up and shattered the window, or inadvertently broke it while slim-jimming. All they took was her teaching tote-bag full of books and papers, which happened to have $41 in one-dollar bills she’d collected from her class for something. It just pisses me off, and mostly because we’ve already been through this twice at our old apartments in the ghetto – and I don’t like to think that kinda crap goes down in our new suburban utopia. The peace and quiet, not to mention perceived security, of having our own house has fleeced me a bit, sheltered me from the car break-ins and overheard domestic disputes of an apartment complex. Man, really pisses me off.

For real this time…

One Reply to “vehicular violation”