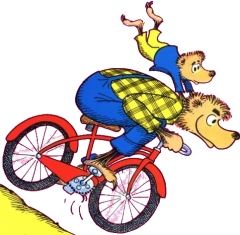 Welcome to my Tuesday night folks. Wanted to get a haircut on the way home from work, but the place looked packed to the gills on a driveby so I opted out. Figured I’d mow the lawn instead, but Sharaun had dinner ready nearly as soon as I got home. Boo-hoo, I had to instead sit on the couch and spend my time uploading pictures to the internet for your viewing pleasure. For those of you who are picture-whores, I’ve uploaded the latest batch of pictures to Keaton’s gallery. And then, as an added bonus, once you’re done marveling at the cuteness of our daughter – I’ve finally completed (or, made current, rather) the huge gallery dedicated to the three-year long project that is our backyard. From breaking ground to yesterday, all in photos – waste some time and watch it change at the backyard gallery.

When I was a kid, I had a book called The Bike Lesson, featuring the Berenstain Bears. The story followed Junior Bear getting a new bicycle, and Papa Bear attempting to teach him all the important lessons he’d need in order to safely enjoy it. Only thing was, Papa Bear made for an awful example. He ran over big rocks, rode off a cliff, even ended up in a tree. Because he was so terrible, he ended up turning most of his lessons for Junior into “how not tos” instead of his intended “how tos.” That’s what I feel like my program at work is like right now: How not to run a program. Everything that could possibly go wrong on a program has gone wrong, and the morale of the larger support team is suffering as a consequence. I’m not talking random, act-of-God, type things going wrong – I’m talking about shortsighted people making stupid decisions and classic planning and execution missteps. It’s so frustrating to be at the helm of a floundering ship, to have to stand there and proclaim “all is well” while you’re secretly wishing the whole damn thing would just go under.

Sharaun and I have decided that we are going to have our annual Halloween party this year. Keaton will spend a few hours with a babysitter. We actually debated this quite a bit, as my first tendency was to feel selfish and guilty wanting to be able to have the party as usual – but the more we talked about it the less negative I felt. She’d only be away for a few hours, and in capable hands, and dad would get to show off his new prop (an animatronic scary scarecrow, as I’ve already decided). We’ve also got a family-themed costume idea, although Keaton likely won’t be around to show it off by the time people start arriving. I’ve always wanted to strike a balance between being a protective, involved parent and one who’s not obsessive about never being away from their child and can’t enjoy their adult-time. It’s amazing though, how much you don’t want to be away from them… part of the plan, I suppose.

Goodnight folks, the media makes up for the lack of writing, OK? OK.

One Reply to “how not to ride a bike”