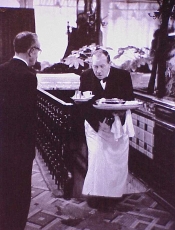 Good evening folks. Good cold, clear evening; dark and quiet but for our daughter crying and Sharaun shushing – I don’t mind the sound. Lots of random stuff today, nothing all that interesting among the mess of it.

Since the last of our family left sunny California, our friends stepped in and starting doing dinners for us on a weekly basis. Three nights out of the week, for three weeks, they’re bringing us dinner. In all honesty, we’re ready now to go it alone – but it’s so awesome that we’ve got friends who volunteered to take care of us. It is nice to not have to worry about dinner, and to have company to fawn over the baby. Isn’t charity awesome?

I am absolutely in love with this Tapes ‘n Tapes song, Insistor, it’s simply outstanding. In search to verify the lyrics I’d managed to decipher, I stumbled on this blog, and this post, which expand on the story told within the song. Funny that I’m writing about the Tapes ‘n Tapes in March, and he back last December – guess I know I’m B-list on this one, eh? But guys, this album is fast growing on me. Sounding like what I imagine the Wolf Parade might sound if they hadn’t had big guns production, at times reminding me of the Arcade Fire and even Pavement – it’s really an album worth checking out. I should’ve listened to the hype and bought it long ago, but it seems like the rave reviews their SXSW show is getting will continue to feed the buzz furnace, so maybe I’ll appear to be on the cusp afterall.

That kee-razy comment from yesterday is surely spam, or at least fits the bill. The misspelled nostradamus.com domain that makes up the commenter’s email suffix is a not-so-cleverly disguised redirect/spam site (with some really odd crap on it that I can only guess is script-generated). Unlike the sole other spam comment I’ve let live on its comedic merit, this one does not appear to be unique to me. Even though it sounds a little Protocols of the Elders of Zion, I think it’s just “my Rice Crispies are talking to me” enough for a chuckle – so it stays.

While not as funny as yesterday’s politics bit, I devoured this interesting article over at Slate (yes, it’s about the war in Iraq). I do detect a hint of “I can’t be wrong” in it, as it comes off a bit too self-assured and smug, but, for the most part, the points are interesting and relatively valid.

And, don’t know if you caught Radiohead’s tour announcement, but it had some interesting tidbits from the band I so adore:

We’re excited to be touring again, especially to play new songs to an audience. For the first time, we have no contract or release deadline to fulfil – it’s both liberating and terrifying. To keep things more fun and spontaneous, we will be playing new songs that are work in progress. We will also be releasing music to download when we are excited about it, rather than wait twelve months for a full blown album release. Music’s not just about all-time greats – it’s also a document of its time, and we want to be able to put out a song when it feels right.

Amen guys, maybe they’ll be able to start the revolution. A top act like Radiohead, unsigned to any major, releasing music as the make it, because they are excited about it. Sharing the creative process moreso than ever with their fanbase, and eventually still asking them to pony up dollars for their efforts. No execs running tracks through radio “fingerprinting” applications to judge their mass-appeal, no deadlines from promoters or holiday selling seasons – just a band writing, playing, and releasing music because they enjoy it. I can see the suits at the round table with their faces red in anger, reading the latest article in Wired praising Radiohead for their pioneering distribution model.