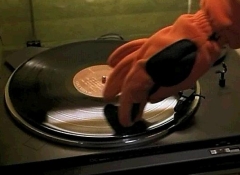 Turns out I set the automatic-publish date on Monday’s entry for last Thursday, so chances are you didn’t catch yesterday’s entry (as it was mistakenly buried back amongst last week’s noise).  So, I’ve fixed that and it’s now where it should be, which is yesterday.

I wrote a lot today, and I don’t even know if it’s a good read.  Somehow I think not.  Enjoy.

As a kid growing up, my interests bounced around a lot. I like to think I was “well rounded,” but who am I to say. As my likes went, I think back on them and naturally separate things into the tangible and the conceptual. For the tangible, I was into the classic nerd items: electronics kits, model rockets, Mad Magazine, fire, Garbage Pail Kids, girls, dinosaurs; all standard fair. And, conceptually I leaned towards things mysterious, supernatural, and occult: UFOs, spontaneous combustion, Egyptian pyramids, magic, etc. For the purpose of this setup paragraph, I want to focus on the conceptual part.

Now, not to say this was all I was into… I liked all manner of “regular” kid stuff (He Man, smashing up Hot Wheels, wrestling, you know the drill), but there definitely was a period where “unsolved mysteries” were my thing. I think this carried over into my adult life quite a bit. I still enjoy a good 48 Hours Mystery, am still intrigued by the occult and all manner of mysticism, and love a good puzzle. There’s evidence of these predilections even here on sounds familiar in my writings about spiritual alchemy, religion, serial killers, and the like.

The point of the preceding, because I feel like I’m taking a little too long getting around to one, is that, by the time the events of the next paragraph took place I was perfectly mentally receptive – that is: The pump had been primed and I ate this stuff for breakfast, lunch, and dinner.

So then – Sometime back around the good old 7th grade, a year where a young man learns much of what he’ll ever know of different slang terms for sexual acts (in addition to a little algebra and earth science), a dear friend of mine introduced me to a book called Big Secrets. Checked out from our local library, the bright primary yellow cover looked interesting enough – but once I dived into the pages I was hooked beyond description. The cover purported to reveal all manner of “secrets,” from the recipe for KFC chicken, secret alcohol-serving clubs at Disneyland, to beating a lie-detector test, and how to mark playing cards.

From first page to last page I was fascinated. This was the kind of stuff I thrived on just “knowing.” To feel like I had inside information, especially if that “secret” info gave me some perceived advantage in “life,” or even a funny nugget of wisdom I could use in conversation – I loved that. To be able to bet someone that I could find the fifty states on a $5 bill; or drop word that I could make a bomb from a deck of playing cards… these were the kind of quirky nuggets I filed away in my brain. Big Secrets, then, was a goldmine for me. I read it with vigor, front to back. And, as I approached the last few pages in the book, one chapter away from the very last chapter, it happened. The chapter was called “Secret Messages on Records.”

I read with zeal the notion that recording artists would purposely put hidden messages in their music, by way of recording them, flipping the audio around so as to make it unintelligible, and then integrating that into the music.  In the days of records (that’s “vinyl” for you digital-agers), un-masking these hidden messages was as easy plopping a firm finger onto the disc as it spun and then forcing the turntable to operate in reverse, approximating the right speed to unveil the secret.

Reversed recordings came into prominence when artists began seriously using the recording studio as a virtual instrument, experimenting with sound as never before.  Of course, the Beatles led this charge (didn’t they lead it all, really?) – laying down what most to consider to be the first purposefully backwards song element in John’s guitar solo in “I’m Only Sleeping.”  By the late 60s and into the 70s and on, more artists experimented with the novelty of what had become known as “backmasking.”  Soon it was a common recording term, and backwards messages were sometimes put into records as jokes.

As a quick aside – backmasking really got a lot of attention during the whole “Satanic panic” the US went through back in the late 80s and early 90s (they even put Judas Priest on trial for it!).  Turns out that, because words spoken aloud have phonetic reversals that often sound nothing like the word spoken normally (forwards), you can “hear” all sort of interesting things in backwards music (if you listen hard enough, I suppose).  So, while some backwards messages are surely done with purpose, most of the “scary” ones (i.e., “you should commit suicide,” or “here’s to my sweet Satan”) are just backwards gibberish that may resemble a real-English phrase.

Anyway, Kyle and I became obsessed with hearing everything backwards.  We suddenly wanted to hear all our music backwards, chiefly the songs in the book that we already knew and loved.  Problem was, our music wasn’t on vinyl, and we couldn’t simply drag the turntable backwards to hear the hidden secrets.  So, being industrious young lads, we set about perfecting a way of reversing audio cassettes.  Remember, this is before the whole “digital music” thing, even before computers for that matter.  Nowadays one can just download an MP3, drop it into the free audio programs that come with Windows, and go to Effect|Reverse.  Back in the dark ages of my youth, however, things weren’t quite as simple.

In the end, we had “invented” a hand-cranked mechanical contraption, cobbled together from several dissected blank audio cassettes, a paperclip, and some Scotch tape, whereby one could extract a bit of recorded sound on tape, reel it into a “holding” tape, flip the whole machine, re-attach, and reel the whole thing back into the original cassette.  The labor-intensive process effectively cut out a bit of tape, flipped it upside down (remember, even though audio tapes have two “sides” these are just the two halves of the same surface of magnetic tape, not two physical sides), and then spliced it back into the existing tape.  When the magnetic tape-read head interpreted the sound on the tape from the opposite side it was recorded on, you got a perfect-speed (albeit a bit muddy sounding) backwards version of the audio.

Before long, we’d heard everything backwards. The Beatles, Zeppelin, Floyd.  We were wholesale reversing entire 90min tapes of songs, just to listen and see what might be hiding.  Soon, we began to experiment with recorded-and-reversed sounds of our own.  Our names, names of girls we had crushes on, the alphabet, you name it.  Logically, the next step was to then listen to these recorded sounds in reverse, learn to approximate the gibberish they’d become, and then say that into a microphone and reverse it – all to see how close we could get to “talking backwards.”  You think this is silly, but I still remember how to say several things in reverse: “Ian Ichamore,” “And the lost see ‘Nam,” “Turn me on dead man”… they’re still taking up space in the old noggin to this day.

I can remember eagerly attempting to play the notes to “Mary Had A Little Lamb” in reverse order on the old Casio, seeing if we could get it right when the tape was flipped.  I remember reading passages from the Bible, making all manner of sounds like a foley artist just to see what they’d sound like backwards.  We even drew up detailed user instructions for our little reversal machine, diagramming the flow of audio on a cassette tape and showing precisely how to reverse it with our invention.

Somewhere in this house today, in a shoebox, I have that tape-reversing machine and the handwritten user manual (on graph paper, because it was more official of course).

And with that story, I conclude today’s blog.  Goodnight, web denizens.