I remember when I was a kid, I dunno, let’s say 4th grade or so – my parents and I having the (now-infamous) “Niagra Falls Discussion.” I think I remember it so vividly because it was so supremely frustrating to me, and to this day I can’t understand why my mom and pop couldn’t help me out with it. Lemme set the scene: I was a curious child, prone to asking crazy questions. I had always seen pictures of Niagra Falls, but had never been there. In every picture I’d seen, the falls were always shown as this massive half-circle waterfall with tons of water gushing over the edge. I’d even seen flyby’s on TV where a helicopter or plane would follow the semicircular edge of the falls taking footage. I was always totally impressed with it, but a question began to nag me.

See, in my head, since the only image I knew of the falls was an arc with water pouring over – I for some reason got the impression that the entire falls must be a complete circle. I mean, in my mind – Niagra Falls was a large “cup” in the earth with water constantly pouring into it… like a crater or something. I just never considered anything else. My question? Why didn’t it “fill up?” So one day I posed my question to the folks: “Hey folks… why doesn’t Niagra Falls ever fill up?” I can see now how absurd it must have sounded, but holy crap. We went around and around on this for over an hour. I went so far as to get out paper and draw them what I was asking… with a huge circle representing my concept of Niagra Falls, and arrows showing water rushing in from all 360?. Their initial answer was that “there’s a river at the bottom.” Fine, I thought: “So there’s an underground river that takes the water away?” “What do you mean ‘underground?'” my day would say. This went on and on, and I can remember being so frustrated that they did not understand what I was asking.

Looking back, I place the blame entirely on my parents. I mean, I was drawing a circle for pete’s sake, calling it a “cup” and “crater,” and asking why it doesn’t fill up – how hard would it have been to figure out that I was mistakenly thinking of it as a closed hole? I wonder if they were just messing with me the whole time? Even to this day, whenever I struggle to understand something they’re talking about, one of them inevitably says “Is this going to be like the Niagra Falls thing David?” Punk parents, screwin’ with a little kid’s head. When I explained to them many years later why I was confused, they acted all like they didn’t know I thought the thing was a crater… punk parents. (Not really guys, I love ya. Punks.)

Last night was the Beulah / John Vanderslice show in SF. We had six people going, so we borrowed a larger vehicle from Anthony’s sister. The night started like most other SF concert outings: a stop in Davis at the House of Chang for some eats, and the commute to the Bay for the show. Anthony was driving on the way there, so we didn’t get the least bit lost. After the show, however, he wisely (considering his narcolpetic tendencies) let me ferry us home. At which point I immediately, and confidently, got us lost trying to leave the city. I somehow ended up on the 101 towards San Jose. After making a u-turn on Caeser Chavez Blvd. NE #1c, we hit the Bay Bridge and were on our way to Krispy Kreme and home.

As for the show, it rocked pretty hard. We had great timing, getting there about 15min before Vanderslice took the stage. When we walked in, Ben spotted him milling around in the crowd – checking out how his cd’s were selling and whatnot. He played for about 40min, and sounded excellent. I was impressed with the harmonies and sound quality, plus the tunes were catchy as all Hell. Ben and Ant each bought a cd. Beulah came on around 10:30 or so. They sounded really good, even though Miles was coming off a case of food poisoning. They played a pretty mixed set, material wise – pulling from all four albums. By the time they finished their marathon set, it was 12:30 and the crowd was duly pleased. I really enjoyed ’em, they rocked, they sounded good, and they were really interactive and fun. Worth the $15 and more.

Yesterday I caught myself reading nearly the entire 138 page Prosecutor’s Summary of the Evidence from the Green River Killer case. Sorry, I’m fascinated by crime, serial killers in particular. Yeah, I’m a forensics show nut, and frequent crimelibrary.com. Whatever, step off. Anyway, it’s some really interesting reading, although at times disgusting, I was totally enthralled.

In keeping with the spirit of sharing old love letters, here’s one from late 8th grade. Found it the other night while digging around for pictures for the Astro story I posted yesterday. Reading it now, I’m totally thinking I coulda got some play back then. Jeez, it’s pretty embarrassing to read, so I tried to pixelate a name or two. Beware: contains coarse language! 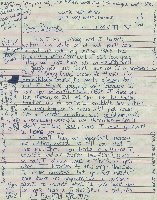 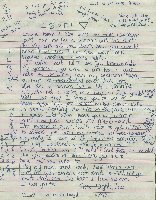 Holy crap that’s painful. See all those song lyrics and crap? I was a Beatles nut way back then, and I guess so was she (no, it wasn’t Sharaun). Anyway, I have some good memories of them days… and that kinda brought ’em back.

OK, this thing is turning into a blog of Beulah-concert proportions… Dave out!