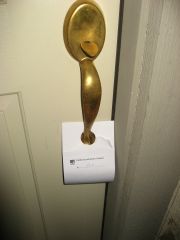 A good Thursday to you, internet denizens.  Once again, work has me buried. Night after night I have nothing to write about since my days involve nary a stray thought from the bits and bytes and ohms and amps and watts and picoseconds I’m steeped in for eight hours a day. But, late today, in one of my meeting-free hours, I plopped the headphones over my ears and set about PowerPointing and Outlooking as the Pod slid into a smooth shuffle, easing me from the Band into some Steely Dan.  It was a nice break from the fast-paced chaos for a moment.

Anyway, let’s get this started.

Today when I got home from work, I came into the house through the garage like I normally do.  But, because I’m expecting a couple packages, I poked my head out the front door onto the porch (where the UPS or FedEx guys sometime leave them).  While there was no package, there was a little piece of paper attached to our doorknob.  Now, most of the time, these are advertisements for carpet cleaners or lawn services or pest control or something, but this one looked different.  In fact, it was pretty plain on the outside – having just our house number written by hand on a line.  Intrigued, I tore it off and opened it.  Inside, I read:

Your gas and/or electric service has been disconnected because of an unpaid past-due bill or credit deposit.

The Total Amount Due, prior to service being restored, is the Subtotal written below Plus a Reconnect Fee.

My huh got disco-what now?  Four-hundred and how many dollars?  What?!

How can this be? I have my gas bill, like every other bill, on an auto-payment system that drafts money right out of my miles card each month.  I hardly ever notice the bills being paid.  In fact, I know I’ve been getting e-mails each month from the gas company notifying me that my online bill is ready to be viewed (and, I thought, paid).  They must have got the wrong house…

Holding the paper, I went inside to call the number listed – and check our gas.  I flicked on the burner on the stove and it fired right up with a bright blue gas flame.  Confused, I turned it off and simultaneously picked up my cellphone to call the number on the notice and sat down at the computer to log onto my account.  I got to the representative at about the same time my account information loaded on the monitor in front of me.  I relayed the contents of the notice to her as I clicked on “Billing History” online.  I mentioned that, despite the note telling me my gas was off, our stove seemed to be working fine.  And then, the “Billing History” screen loaded.  Here is what I saw: 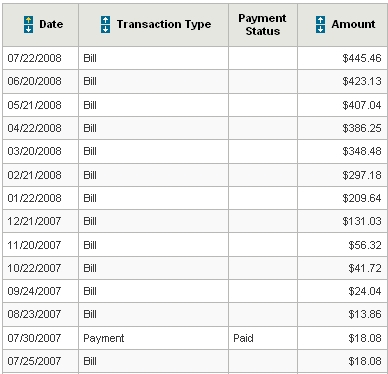 As the representative confirms what’s now right in front of me on the screen, I click onto the “Setup Automatic Payments” link.  You currently have no autopayment options configured, the website tells me.  Dang.  Something happened to my autopayment data.  I quickly look at a couple payments prior to July of last year, and verify they were automatically drafted off my credit card (as expected).

I tell the representative what I’m seeing, tell her something must have busted my autopayment options… that I had no idea my bill wasn’t being paid.  Initially, of course, she assumed I was either a deadbeat or could just not afford to pay my bill – and suggested some sort of installment plan which would allow me to get my service reinstated. I tell her that the bill isn’t an issue, and that I’ll go ahead and pay the amount due right then and there online while she’s on the line.  She’s obviously not used to this, but is now amused at my situation.

It strikes me at that point that my gas probably is turned off, and I walk back over to the stove to check something.  I fire up the burner, wait ten seconds, and confirm what I figured: Once the residual gas in the line burns, the flame slowly winks itself out.  I tell the representative, “Yup, our gas is off alright.”

The conversation at this point got pretty hilarious, with me cracking jokes about how I could possibly not realize my bill had gone unpaid for a year – and how I couldn’t even cook Ramen now.  How I was a bad husband and father, and would likely wake tomorrow to find our furniture repossessed to boot.  For her part, the representative was simply amazed that they’d let me go a full year, and said it’s the longest she’d ever seen someone in arrears.  At one point I said, “You know, everyone is going to make fun of me when I tell them this, right?”  She cracked up, and kept reiterating how odd it was that I “got by” for a year without paying.  I echo her sentiment, and keep saying variations of things like, “Man, this is crazy.”

Oh, and, in the end, I had to pay a $25 reconnect fee and they’re gonna hold two times our average billed amount as a “deposit” which, upon one year of me not defaulting on payment again, will be returned to me with interest.  I consider the combination of these fees, which totaled something near $90, to be my “idiot fee” in this case.

Five-hundred or so dollars later, the gas man comes tomorrow to give us back the gift of fire.  And thankfully, they didn’t contact any credit bureaus.  Sheesh.

6 Replies to “in arrears”