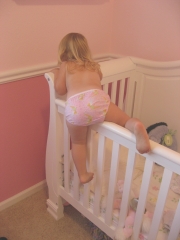 Tonight, a friend asked Sharaun and Keaton and I over for a dinner and swim… and I turned him down.  Now, this isn’t something I’d normally do – we’re a fairly social bunch and we trade dinners at each others’ houses pretty often, usually at least once a week.  But, I was just feeling burned out.  We’ve done something every free minute of every day for the past week or so – and I was just ready for a stay-at-home do-nothing break.  So, I was honest, saying I just wanted a night to “decompress.”  And here I am, decompressing, apparently… listening prog-rock hour on Sirius’ “Vault” channel (which, by the way, is not anywhere near as good as XM’s “deep cuts” station was – so hopefully that gets sorted in the merger).  Ahh… decompressing; feels good.

For about a month now, when Keaton wakes up from her nap or in the morning after a night’s sleep she screams at the top of her lungs from her crib for “Moooommmy!!,” or “Daaaaaaddy!!”  It’s not a demanding cry, it’s actually a really endearing yelp for someone to come free her from the confines of her bed.  I’ve come to look forward to that hollering, it makes me smile the biggest smile and feel all good inside.  When it gets me up from bed, I’ll walk down the hall and knock on her door, to which she’ll reply, “Yes!.”  “Can I come in,” I ask.  “Yes!,” she answers enthusiastically.  I’ve learned to love this little routine.

Alas, it was a love affair cut short.  Yes, I’m afraid that Keaton has finally reached that bedtime milestone that so many parents of kids her age went through long before us: She’s finally mustered enough courage to reliably climb out of her crib when she wants to.  We knew the day would come, but our policy was to put her down in the crib as long as she was both comfortable in it and would tolerate it.  I mean, why invite that added element of mobility?  (And don’t give me any B.F. Skinner type psychology please).  After all, she’s two and a half now, so it had to happen sometime soon.  Honestly, so far I like it.  She doesn’t seem to get up and get herself out randomly when we’d expect her to be sleeping, so for now it’s limited to her actual wake-up times – which is fine.  And, like so many other little milestones, it just proves to me that she’s growing up, and her learning and increased daring-do (which is still pretty minimal) make me proud.

Besides, now, instead of looking forward to her banshee wails each morning, I can instead listen intently for the squeak of her door as she lets herself out and tumbles down the hallway into our room, where she’ll stand there with that half-asleep look on her face, hair a mess, and say, “Good morning Daddy, I just waked up!”