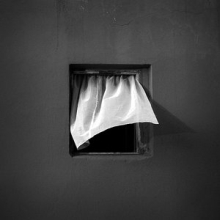 Happy Monday friends. Me, I had a good weekend. Managed to do a fair amount of cleaning and organizing around the house and get in some good kickin’ it time with friends. Neither Sharaun nor I is feeling top-notch, both fighting something, and Keaton’s got “the croup,” according to the doc. So, we’ve hung a “Quarantined” sign on the door to ward away those of good-health from the little infirmary we have here.

Oh hey, before I forget, I finally got around to posting some pictures from our Christmas in Florida. You can check them out here.

Remember Friday when I wrote about the storms coming to sunny California? Yeah well, the storms came, and they beat upon our street with fists of wind and rain. The news, of course, covered the squall as if Al Queda was behind it, with unrelenting 24hr coverage and plenty of Johnny-on-the-spot reporters to give everything a nice local color. I don’t know when weather became cause for round-the-clock “death watch” reporting, but things have gone a tad far if you ask me. When I start seeing computer simulations of what “could” happen if the wind picked up to 900mph (just hypothetically), I change the channel. Anyway, back to those fists of wind and rain: In this fight the wind was Smokin’ Joe and our backyard fence was Ali. And, for those confused by pugilistic allegory, here’s some visual aides for that last sentence: 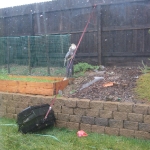 Yeah, it totally blew down, about ~30ft of it, posts snapped clean off at the dirt (where I suspect they had already rotted a good deal). I actually tried, during the fiercest winds while the fence was wobbling fiercely but still holding onto the ground, to go tie some guy-lines to the posts in the most trouble. The wind was so strong, however, that I couldn’t even use the nylon strap to right the tilting thing, pulling with all my might and using my weight, I was nearly lifted off the ground trying to wrestle what had essentially then become a huge wooden sail. I mean, look at the toppled BBQ Anthony and I built in the foreground there, that thing ain’t light. After that, I gave up and just let the thing go down. The tall shrubs we have on the other side of the fence were all that kept it from blowing away completely.

Oh, that last pic? That’s what I did to save another wind-wobbly section of fence. See that tie-rope? It’s secured to an old gas grill I happened to have laying around in the backyard, and, while the wind was strong enough to drag the grill across the lawn, it couldn’t quite manage to pull it over the retaining wall. I know it’s ghetto engineering, but it worked. I’m sure the first caveman-graven wheel wasn’t quite a Michelin, either.

I was going to write some more… but I just don’t have it in me. I’m gonna bake some cookies and listen to some new albums instead. Goodnight lovers.