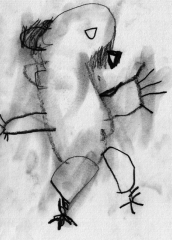 Don’t call it a comeback.

It’s Saturday morning and I’m looking back over these past few weeks with a sense that the worst has passed.  This Thursday and Friday most recently gone saw a bit of “culmination” for me at work.  The primary two or three things I’ve simply been pouring my time and efforts into seem, for the most part, to be “over the hump” and knocked down to coal from their previously stoked bonfire.  I think last week was the worst; I worked eighteen hours days, 6am to midnight and then again, Tuesday through Thursday.  Some might say I’m doing it wrong; perhaps so.  Doesn’t matter now, what’s done is done.  I missed writing.

From a blog perspective, I missed writing a poignant (or at least tongue-in-cheekily so) series of paragraphs about Keaton’s first day at Kindergarten.  I missed it, the actual act of it, well the part that a parent can miss, anyway.  The part where she’d be all lined-up at 8:15am on Monday morning outside room J25.  The teacher then bidding them to wave goodbye to their watching families for the few hours they’ll be under her care and tutelage.  The part where she’d be all dressed in her day-one finery and mom will have her hair shining and straight with one-hundred strokes and she’d be smiling and look all youthful-healthy and filled with excitement and maybe just a little visible trepidation, noticeable only to those close enough to spot it.  The part where maybe a big ‘ol grown-man dad might get a little misty as he watches his baby girl start her probably-not-long-enough march into adulthood.

Yeah; I missed all that.  It’s not as bad as it may seem though, as we got to go to an “orientation” thing the Friday before and watch a practice-run of the whole ritual.  Who’s to say that wasn’t the real “first time” anyway?  For me it was, at least.  So I got to see it, got to watch her face and shiny hair and even got a touch of the vapors seeing her disappear with the column of other mostly-eager fiver year olds.

She tells me she met a new friend named Angela and her favorite parts of the day are recess and lunch.  She tells me that she wasn’t sad at all leaving mom on that first day, and that she’s happy her next-door-neighbor girlfriend is in her class.  On Mondays she has school, dance, and soccer.  Sharaun has adapted crock-pot meals for the new schedule.  I feel like maybe it’s the “next phase” of parenting, the “shuttling” phase.  She’s getting bigger daily, so I can’t be doing this eighteen hour bollocks much longer.  Not enough days to miss more than a few for work.