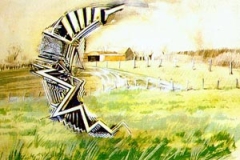 I had a triumphant day at work today.

Well, a half-day at work, as I spent the morning working from the kitchen table while we got a whole-house fan installed.  But man, I got tons done and it really improved my outlook – which has been somewhat sour and dire of late.  I pride myself on my planning, call my anal or whatever but I truly enjoy preemptively solving problems that will never happen because I understood and accounted for them through my prescience.  Today that’s what I did, flexed my planning muscles, played some what-if games and wrote some contingency plans.  Tried to cover as many of the bases as I could dream up on my own, paint in all the corners, plug up every hole in the dike.  I like days like that because I walk away feeling accomplished.  And with this and that to tarnish me lately, feeling accomplished is what the doctor ordered.

Been working a bit here and there cribbing down albums and thoughts for my annual best-of-halfway post.  Sara, I’m counting on you, at a minimum, to read and enjoy it.  OK, you don’t have to enjoy it.  Just read it.  Funny first half for music, most everything up until April was pretty underwhelming.  Glad for some later entrants to buoy the front-end.  If you like music, maybe of the softer, feyer kind, you could do yourself a favor and go ahead and check out the new Fleet Foxes record before I finish writing that it rocked January through June.  Took a few days to grow on me but I can’t get it out of the rotation to save my life.  Even Sharaun is singing along at this point.  But I don’t want to give away the ending…

Tonight, Sharaun came into the living room a little freaked out saying she was experiencing what she called “odd visual disturbances.”  I asked her to describe what she meant, and she said there was a “shimmering sliver arc” in one of her eyes which was obscuring her vision.  She said it was “lattice-like” and had “wavy rainbows” and she could hold up her hand and it would disappear behind the thing.  I was intrigued and did Google search for “rainbow visual disturbance” to find the following description of something called an “ocular migraine” or “retinal migraine:” An arc shaped sliver that is wavy, almost mirror-like in appearance and has rainbow colored shimmers. She was shocked by the accuracy of the description, almost as much as I was that what she was experiencing is a for-real, well-documented visual anomaly which is extremely consistent from person to person.  No really, a Google image search brings up at least ten folks’ recreations of what they see (the image heading up this post was the one closest to what Sharaun said she saw).

PS – Today’s title is a holdover from an old draft which had nothing in it.  Rather than delete the draft, I decided to reclaim the database space with this entry.  I liked the title and, not knowing what I was on about when jotting it down, decided to leave it.  So yeah, “in gray contrast” to something… apparently.

2 Replies to “in gray contrast”