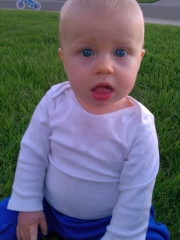 Sharaun’s mom was in town for a long Easter weekend.  I took Monday off so I could spend an additional day with her in town.

We decided to head downtown and bum around the little historic district.  I don’t “get” most of the shops in these places.  Full to the point of clutter with stuff that looks like junk yet is priced like finery.  Because the stores are packed tight with towering hoard and I was pushing Cohen around in the stroller I often couldn’t navigate the pathways and was forced to find something else to do while the ladies, Sharaun, Keaton, and Ami (what Keaton calls Sharaun’s mom), browsed.  This meant that he and I spent the better part of an hour wandering the shopfronts.

It’s nice to have that time where it’s just you and your kid.  With Cohen most of our father-son time has been at home; we haven’t gone much anywhere just he and I.  While I was pushing him around listening to him chatter, I remembered one of the first times I had the same kind of solo outing with Keaton.  In fact it was in the same place, when I took her down to a chili cookoff on a nice Summer Saturday.  I wrote about it here, actually.  And, like that time before, I enjoyed every smile directed into the stroller and every, “He looks like his dad” themed comment.  It was a nice little break from work where things are run-away worthy right now.  I need to do my absolute best to focus, working double-time between now and when we leave in four short weeks.

But that time, that time where it’s just you and your kid(s)… that’s the stuff right there.  The mother lode.

One Reply to “just us part ii”