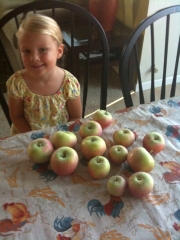 There was a storm here last week while we were in Mexico.  Apparently it was fairly violent, or so say our friends.

When we got home, I did a quick inspection to look for damage.  The newer trees were the most notable casualties.  I don’t think any of them are broken beyond repair, but several were bent nearly 90°.  Most alarming was seeing the apple tree I planted only this year, broken free from it’s stabilizing stake and doubled over under the weight of its own fruit.

Over the years I’ve had mixed luck with fruit trees, although lots of that is likely just my impatience during the early years when they just don’t produce much.  But this apple tree has surprised me; producing so much fruit I was amazed that the little sapling could even support it all (both weight-wise and nutrient-wise).  It’ll be interesting to see what it does next year, as I have a theory that I got so much fruit this year because it was cross-pollinated at the nursery amongst all the other trees before I even planted it.  Likely next year, unless I plant a sufficient cross-pollinator (don’t think my pears will do it), I won’t get as much.  The internet also says I did wrong by allowing so much fruit to grow this year, and that by not thinning it I may have ruined the tree’s crop for years to come… so we’ll see.

But anyway… this was about my poor tree all bent and broken after the stormwinds.  Since it was 1am when we got home, I only propped the thing back up against its stake, not re-tying it or anything.  Then, a day or so ago, Sharaun picked one of the largest apples, insisting it was ripe and looked “like the Fujis I buy in the store.”  Sure enough, it was ripe, and was totally delicious.  Today then, after work, I went ahead and picked the rest of the fruit.  Keep in mind, this tree is only about four feet tall and just over an inch around at the thickest part of trunk.  Even leaving a clump of four for a little more growing time, I pulled the bounty pictured above-right from the little tree, not bad!

One Reply to “eighteen apples”