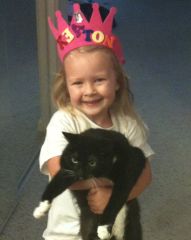 Night’s nearly over now; at leas the part I’m typically awake for.  And Thursday’s coming… right around the corner from now.  After that, Thursday will beget Friday and Friday Saturday.  Then, we’ll pile into one of those flighted metal cigars and zoom-swish! away to Mexico.  While there, I will try and do my typical vacation-style writing, which consists chiefly of pictures and short sentences about the awesomeness of our stay.  Look for it; it’ll be a happening.  A-list.

For a few months now, Keaton’s expressed interest in picking up and holding our cat, Keeper.  Until recently, however, she’s been unable to find a way to 1) do this without the cat running away from her, and 2) muster enough strength to physically lift her.  This all changed in the past couple weeks when she figured out that she could reliably lift Keeper via an under-arm bearhug style hoist, and also that she’s now strong enough to ferry her around in this position.

It makes for some hilarious moments, because, despite being incredibly docile about the whole thing, the cat clearly dislikes being carried around this way.  Out of the back of the house somewhere Keaton’ll come, her arms encircling the poor cat’s body just under her front legs, squeezing her tight to keep her grip. This makes the cat’s head look all squanched up into her body… as both try to succumb to gravity.

She lets out these little half-meows (probably can’t get enough volume of oxygen to make anything appreciable) and we’ve told Keaton that this is her way of saying, “OK, I’m done now; please let me down.”  We’ve told her she has to listen to kitty when she “talks,” or else she might get scratched or bitten.  But, in the end, I don’t think the cat has the balls to do anything.  At this point, I think she’s been bested by the three year old… and she’s submissive.

As an aside… I’ve decided I don’t want our cat anymore.  I think I’ve evolved into a “no animals” kinda guy.  Not that I don’t like them, but I’m done with all that.  When we wear this one out, it’s over.  Is that heartless?  Whatever.

Oh yeah, just before I go… I wanted to mention how much I enjoyed Pitchfork’s “Top 500 Albums of the 2000s” feature (not to be confused with the”Top 500 Tracks of the 2000s” feature I wrote about a ways back).  Particularly, and I’ll try not to ruin it here by telling you where this review lands just in case you want to read it in order, I loved the review of the Arcade Fire’s incredible album Funeral. I’ve written about Funeral myself more than a few times, professing my profound love for the record, but the reviewer on P4K captures my hindsight thinking perfectly:

… besides being a turning point for indie rock, Funeral was one for the indie community as well. Whether it’s due to increasingly fractious listening habits or the increased ability for dissenters to be heard, Funeral keeps on feeling like the last of its kind, an indie record that sounded capable of conquering the universe and then going on to do just that. The consensus hyperbole that met Funeral resulted in any record that threatened to reach that level becoming met with severe scrutiny or even outright derision. And still, we wonder if there will ever be anything quite like Funeral — something tells me that as music becomes even more readily available to us in the next decade, we’ll still go through it all in the hopes we can find something with the unifying force and astounding emotional payload that only albums like Funeral can provide.

Yeah.  Really.  When do we get the next Funeral?  I think a record that good ruined me for everything else.  C’mon someone, do it again.