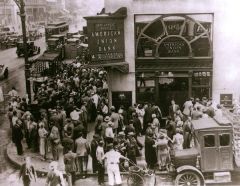 Humpday.  Sorry no entry yesterday, my brain failed.  Not much more for you today, I’m afraid.

Tonight Sharaun had volleyball and I was on daddy-duty.  And, I gotta admit I kinda neglected Keaton in favor of the debates.  Man, was it tough.  She just wanted to play, y’all.  It was heartbreaking.  I’m a bad dad.

A couple times I obliged her and paused the sparring senators so we could “hide from bears” (huh?) and “do decorations” with crayons.  But, for the most part I was a deadbeat dad sucked in by the glow of the plasma and the soft lull of two men babbling.  You don’t need me to analyze the thing, so I won’t – but I will say that I found it a lot more interesting than the initial debate.  If you missed it, rewind your Betamax and get your watch on!

Today was a wall-to-wall day at work… a 7am meeting with Germany and a meeting until 7pm with Japan.  Delivering the same message to both – and what a difference culture can make.  The meticulous and honorable Japanese refuse to take a simple “no” for an answer, while the Germans make an extremely detailed evaluation of the data and arrive at the sober conclusion that “no” is the only technically-feasible answer.  One meeting fairly easy, one hard – both equally uncomfortable for having to be the bearer of bad news.  Maybe that’s what they pay me for… because it’s surely not the stuff of paragraph-three over here (one of my very favorite unedited bits I’ve published).

Today when I walked out of work wearing my jeans and tucked-in company-logo polo (matching belt, shoes, and socks too, I’ll have you know) – I noticed that, for the first time this year, I was comfortable with the outside temperature even in pants.  As I was thinking that the weather must be turning, a windblown leaf skittered across my path.  And then another, and another.  This and the flirting rains this weekend past say that Fall is in the air – and I couldn’t be happier.  My favorite season, my favorite time of year, my favorite succession of family-oriented holidays.  C’mon Fall, make haste.  Bring on the pumpkin, turkey, and reindeer.

I dunno guys… there’s no magic tonight.  Sharaun’s snoring on the other couch and the remote for the TV is buried amongst her in the blanket and cushions… so I’ve left the television on but have switched on the iPod as the audio.  Right now Jerry Garcia is soundtracking an episode of Dateline or 48hrs Mystery or something… did you guys know Rubin & Cherise killed some plumber in the Hamptons?  Or… something.

That’s it, this is without point at this point.  I love you guys for real, let’s meet somewhere for a beer and some catchup.