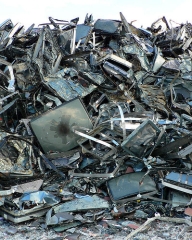 Sharaun’s subbing on someone’s soccer team and I’m, again, listening to the iPod.  The Allman Brothers are on, a seemingly neverending live track (sounds so good right now I kind of hope it doesn’t end).  Got a lot done at work today… was a productive one.  Let’s blog about something unusual.

For the upcoming roadtrip to Disneyland, I had been thinking about getting one of those portable DVD player things to help keep Keaton entertained on the drive.  The only problem with those, however, is that they’re just not flexible enough.

I mean, we never watch actual DVDs… we watch DivX-encoded AVIs or H.264-encoded M4Vs… and you can’t play those on a DVD player.  So, to get the universalism I was looking for, I began pricing those little “personal video players,” only to find that they’re way more than I want to spend and don’t support nearly enough codecs.

That’s when I got the idea.

We recently upgraded our home computer’s flatscreen, since the DVI port went bad and it could only do analog video.  Rather than throw the 19″ widescreen LCD away, I shoved it in the garage in case I could use it one day.  And, today was the day.  By taking off the stand at the bottom, I had a perfectly flat little (big, actually) monitor.  With some help from the Dremel I fashioned an adjustable hanging strap that threads through the back of the housing, and tightened it perfectly to hang from the passenger seat headrest (it can also be adjusted to hang one side from each the driver and passenger headrests, positioning it center view for all rear passengers).

Add one $25 400W two-outlet DC-AC inverter, plug in the laptop and headphones, and you’ve got unlimited video for roadtrips.  Heck, with the wireless broadband card you could even stream movies or TV to the thing if you wanted to… or purchase content on the fly.  The only drawback is that the thing is too big for the job… leaving Keaton strapped just a couple feet from the screen.  Pure brain-rotting backseat entertainment; you have to give it to technology, don’t you?

Now it’s close to 10pm.  An epic track from Wishbone Ash’s live record is tearing up the speakers, and I just opened a cold beer.  It’s dark outside, but it’s still warm enough (and I’m lazy enough) that the air conditioning is still on.  So it’s nice and cool in here, the fan is running above me.