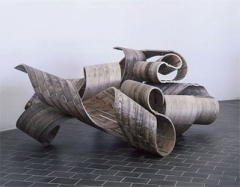 Music post. If you don’t care you may safely ignore. Although… before you do, note that this one contains both mystery and intrigue and perhaps the makings of some cool “internetty stuff” too. So, maybe you wanna read it after all.

Got online for the first time tonight around 10pm, and was greeted with a pleasant surprise. Let me explain.

See, for Radiohead fans, it’s been a neat couple weeks. Just last week we get the surprise online-only release of their tribute track to Mr. Harry Patch, Great Britain’s last surviving WWI veteran who passed away last month. Then, an online interview with Thom in which he says the band is “done making albums.” No, not breaking up, just presumably eschewing the aging long-player format for a while. In this same interview, Mr. Yorke says the following:

Cryptic… And, finally, tonight. I log on to the internet’s #1 “back alley” for digital music acquisition. No, I won’t mention where. However, upon checking the top ten items for the day, I was surprised to see yet another unrecognized-by-me Radiohead item in the top spot. Sure enough, it’s a new song – and it’s legit; it’s Radiohead. But where did this thing come from? In an odd twist, the uploader hasn’t provided any information about where the track was sourced. Unusual for something as high-profile as a brand new Radiohead track, which is a sure-thing to take the #1 spot. Most uploaders would want to bask in the glory of breaking such a leak.

Anyway, it’s ostensibly a “scene” rip, and it comes complete with an NFO file. (If you don’t know what I’m talking about at this point, check the links on those words.) Opening the NFO, the mystery deepens: The release group is some heretofore unknown called “Wall of Ice,” and although the file appears quite authentic to a scene release, replete with the standard ASCII art and rip/group info, its only other contents are just some rambling (not very much unlike the ramblings of Radiohead’s own Thom Yorke on the band’s official website, hmmm…):

Furthermore, dear Watson, the uploader of the song and NFO is also a mystery, having been registered for quite a while on this particular site, but without much account activity of note. After uploading the track his or her “paranoia” settings were changed to “level five” (the highest level of usage-statistics obfuscation allowed). Who is this person? How and where did they come by this track? Are they perhaps an agent of the band, or someone actually from the band? Could this be an orchestrated, purposeful “leak?” My cursory research shows that the track likely made its internet debut through that uploader on that site…

Perhaps more telling, the track, entitled “These Are My Twisted Words,” is numbered as “01” and the release date listed in the NFO file is 8/17/2009… or next Monday for Marty McFly. An indication that more are to follow? Could this be the “great idea for putting things out” Thom talked about in the above quoted interview? Are Radiohead going to do a NIN-inspired album release, maybe all ARG style? Drop a new track on the web’s most exclusive underground music sharing site and bury clues to the next track within the self-leaked release? Could the NFO file be hiding breadcrumbs leading to the next track?

Dunno; but I’m willing to follow everyone else (well, those fanatic enough like me) down the rabbit hole on this one just in case.

There. Wasn’t going to write tonight. Pulled this together while listening to the new track and F5ing the sluething threads on the forums. I get totally engrossed in this stuff.

One Reply to “when are you coming back?”