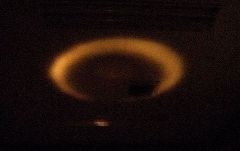 Hey Tuesday.  Monday started off full of doodoo when I put the wrong guard on my beard trimmer and cut my stubble down to nothing instead of it’s usual healthy crop.  Eh, it’ll grow back…

At the cabin this past Independence Day weekend, we reveled alongside several of our good friends.  So many of them, in fact, that the sleeping arrangements at the modest accommodations were submarine style… packed.  Sharaun, Keaton and I shared the loft with, count ’em: six other adults and three additional kids (we totaled twelve, all told).

With adults and kids spread across two queen beds, four twin beds, a futon and two Pack ‘n’ Plays, it was like a tin of sardines (happy sardines, however, don’t misread my exposition as complaint, OK?).  In close quarters like this, you can imagine that any one family’s nighttime drama became the drama of the “loft family” collective.  So, what kind of drama did we experience?

Somewhat surprisingly, night number one in the loft went off relatively unremarkably (the dictionary says that last word is not really a word; humbug, says I).  Everyone slept, including the kids, and no one pillow-suffocated anyone else in their sleep. The second night, however, the sole non-kid-having couple decided they’d put in a valiant effort and cashed in their loft-family chips in favor of a two-man tent pitched on the lawn outside.  This opened up a larger bed in the loft, which Sharaun and I then claimed.  Subsequently, the futon we had been using was opened up by our bedtime upgrade and was in turn filled by yet another weekender in our crew (a brave one, at that).

OK, did you follow me?  The first night, we all slept where we all slept.  The second night, Sharaun and I moved into a new bed.  Throughout this game of musical sheets, Keaton’s sleeping accommodations remained unchanged – and on night two she bedded down on the same twin bed she’d slept in the night prior.  Anyone see where I’m going with this?  No, OK… here then…

Sometime in the middle of the night, unbeknownst to Sharaun and I, Keaton must’ve been roused from her slumber.  Now, I imagine waking in an odd and unfamiliar place would be confusing enough for a three-year old… but what about when you then get out of bed, walk over to the futon where your parents were the night before, and, after patting around in search of them, realize that they simply aren’t there?  How must that feel?  What must go through the toddler mind at such an occurrence?

For Keaton, I think it went something like this: 1) Wake up, have enough wherewithal to realize you’re not at home yet in that cabin like last night. 2) Remember where Mom and Dad were sleeping last night and, with the help of the near-dead flashlight your Dad purposely gave you before putting you to sleep (in a fit of brilliance he thought he could both satisfy your illogical yen to sleep with a flashlight and prevent you from flashing said flashlight around the room in the dark and waking the entire loft), navigate your way from your bed to the futon where they should be.  3) Pat around looking for Dad or Mom and then realize that they just ain’t there.

It’s at this point that the three year old brain must have reached a crossroads.  Awake, alone, and void of parents… I can almost feel the fear and uncertainty creeping in.  I’m actually surprised Keaton didn’t call out for us or begin crying at this point.  Instead, she must have figured that her folks were downstairs.  Logical, I assume, but her decision to the attempt the descent from the loft in the pitch black (or, with the aid of that near-dead flashlight) still comes as a shock.

But she did; she went right down those stairs.  And, of course, she missed the last step completely.

Everyone in the loft, and the lone soul sleeping in the hide-a-bed at the very foot of the stairs, heard our daughter pitch forward in the night.  They all heard her cries as she squealed and wailed.  Jeff, the hide-a-bed sleeper, actually awoke as she tumbled down, watching her fall and assuming, as most would, that she was being accompanied down by an adult… perhaps to use the potty or something.  He watched her as she righted herself and continued to walk.

She caught her toe on the raised platform on which sits the wood stove and took a header into the giant iron beast.

Everyone in the loft, and Jeff who had a front row seat, heard our child’s cries escalate with pain and desperation.  Even Sharaun and I heard it.  She turned to me, half sitting up, “Is that Keaton?”  “No,” I replied, after listening, “that noise is coming from the other side of the room, Keaton’s asleep on this side.”  My aural triangulation skills seeming to satisfy her, we both settled in to return to sleep.  Meanwhile, Keaton continued to cry… and by now Jeff realized that she wasn’t accompanied by an adult at all, but that she was, rather, all alone and wandering through the cabin at night by her lonesome.

“Keaton, what are you doing down here?” he asked, “Do you have to use the potty?”  “No,” replied, half stuttering, sucking breath in the sharp gasps of a child mad with tears.  “Do you want to go back up to your parents?,” he asked.  “No,” our daughter replied, “I just want to sleep here with you.”  (I find that last bit completely hilarious, by the by, but it’s not the point of the story.)

By this point, Keaton had apparently been crying for a few minutes, and everyone, excusing Sharaun or I, was awake and listening to the events unfold.  In fact, come morning, we would learn that all of them had instantly recognized the distressed child as ours, and were each wondering to themselves when we were going to get up and do something about it.  Sharaun and I, however, continued to sleep, assured in the fact that our daughter was sleeping safe and sound in the bed across the room from us.

Shortly thereafter, another of the loft folk arose to use the restroom.  On his way down he noted Keaton in her state, and further noticed that neither Sharaun nor I were anywhere to be found.  Driven by what I can only guess was a strong parental instinct, this kind fellow scooped up Keaton from her refuge with hide-a-bed Jeff and carried her up the stairs to the loft.  It was around then that I was brought back into reality by a bright white LED headlamp shining down on me from the foot of our bed.

There stood Mike, holding Keaton in his arms, beaming his light into our eyes.  He’d nudged Sharaun’s foot to wake us, and the look on his face seemed to wordlessly say, “Hey guys… what the?… here’s your crying daughter.”  No words were exchanged, other than Sharaun smacking me on the shoulder and saying, “I told you it was Keaton”!  Once safely nestled in bed between us, Keaton recounted her harrowing nighttime escapade.

“I got up to look for you Daddy, and I patted your bed but it was empty.  Then I went down the stairs on my bottom and my flashlight didn’t work and I couldn’t see and I fell on my thumb!  Then I tripped on the bricks and hit my face on the stove.”  The story broke my heart, and it took a while before she calmed down enough to drift back off to sleep.

So yeah, we’re the parents who slept through their kid falling down the stairs then hitting her face on the woodstove.  And, in the morning, we sure heard about it.  Seems folks found a way to poke fun at our parenting prowess through the events of the night.

Sheesh… no one ever slept through their kid falling down stairs and hitting her face on a stove?  Come on… happens all the time I’ve heard.

Posted upon typing, no proofing.  Forgive me and goodnight.