Happy Monday folks.  I had ample time to write most nights last week when I didn’t, but nothing came out off the keyboard when I sat down to do it.  Sorry.

Lately, I’ve really been enjoying riding my bike.  I mean, really enjoying it… like to the point where I find myself wanting to go ride and explore new terrain.  In fact, I’ve got recent designs on plopping down some cash to improve my experience – and when it comes to impulsively  spending money you know I’m “into” something.  I’ve been planning to upgrade my knobby tires to some hybrid ones for better on-road traction, and I’ve considered some type of bag-toting rack for the back for the ride to work.

Yeah, I’ve really found myself enjoying getting around to places cars can’t go, and getting some exercise while doing so. And today, despite the 100° plus temperatures blast-furnacing Northern California, I decided to take an extended bike ride.  Planned at around ~17mi round-trip, I set out after church around noon in anticipation of meeting up with a group of friends up by the lake for some swimming and grilled hot dogs.

The ride out was uneventful, and challenging at times, but ultimately fun and worth the sweat and strain.  Sharaun drove the Ford up with Keaton and met us all there, and we grilled, played in the water to escape the oppressive heat, and had a grand old time.  Around 4pm we decided it was time to head home, and judging by my ride there I expected about a 40min trip back to the house.

I was making excellent time, and decided to take the tiniest of shortcuts – just to maintain my clip.  At a spot where the paved trail bends and does a hairpin turn to avoid going up and over a small hill, folks have blazed a trail that cuts out the trail’s time-wasting zig-zag.  It’s just a dirt trail up a steepish “peak,” about 15ft high and then right over the top for a steep run down the other side.  I’d taken it on the way to the lake to carry my momentum rather than wasting it on braking around a tight turn, so why not again?

As I crested the hill and looked down, I realized that, traveling in this direction, I was a little unsure if I was suppose to go left or right on the trail below (the trail comes to a three-way junction at this point).  Moving too fast to to ponder it for very long, I initially decided I wanted to go left, and then about two-thirds of the way down changed my mind to right.  Bad idea.

Trying to adjust at the last minute, at speed, caused my afterthought of a right turn to go wide and I skirted dangerously towards the far left edge of the paved trail.  Off the pavement and about an inch below grade lay a pile of boulders.  And, eventually, all  my leaning right couldn’t keep my wheel on the trail, and it dropped off into the boulders.

Of course, my forward motion was immediately over.

My bike wrenched against the now immobile tire, jackknifing and sending me sprawling.  My right wrist hit first and then I heard my back slap against the pavement.  I’d gone full end-over the tire and landed on the pavement.  When I got up and inspected myself, my shoe was alongisde the bike a couple feet behind me, and I seemed no worse for wear.  I mean, a couple scrapes, and my wrist is actually pretty sore, but the bike and I came out fine.

Anyway, being nerdy, I found this neat online site that will take in your GPS output file and generate a really cool report showing speed, elevation, map of your route, etc.  After returning safely home, I wanted to see the crash in graph-form.  Here’s the point where I hit the pavement (and my iPhone case has the scuffs to prove it, even being in my pocket): 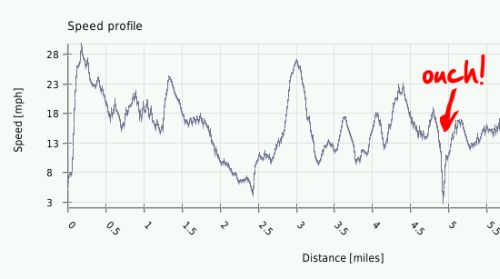 The gradual valley around the 2.5mi mark is just a steep hill, but the asymptotic one just before for the 5mi mark is just too abrupt to be anything but my spill.  Sure enough, I can mark the spot on the map by looking for the little “wiggle” where I went right (when I really should’ve gone left).

Well then, a whole entry about a bike crash.  Better than not writing at all, I suppose.