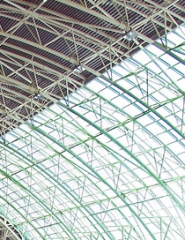 Happy Thursday folks. I’m writing from a cramped table in an airport terminal (crowded with two laptops, two cellphones charging, and two beers). You’ll find out why as you read on.

Since I won’t be home in sunny California until sometime around midnight tonight, I figured I should go ahead and write when I can. So, here I am, a lull in the second day of this two-day all-day meeting, writing a bit. I have time, actually… at lunch United sent me a text message saying the flight leaving here was delayed by more than an hour, which puts me right up against the connection in Chicago. Looks like I’ll most certainly miss that, and a couple calls to the airline and the company travel agent bore no fruit. So, I’m stuck hopping the flight to Chi-town and hoping for the best on the connection. Since I’m relatively sure I’ll end up missing the connection, I’ve been looking at what there is to do in Chicago. I’m traveling with my boss, so I would at least have an companion to bum around downtown with. We have enough time to get downtown, have some dinner and maybe walk around a bit.

Wait… wait a minute folks… this just in… the BlackBerry buzzed in my pocket. The text message tells me that our flight has been delayed again and missing the connection is now a certainty (I think I know why). Bummer. Now it’s so late it’s not even worth making the flight to spend an evening in Chicago… so it sounds like another evening in South Carolina. Yippee…

Today we had some free time that we used to grab a southern-style lunch and do some walking around downtown Columbia. I had sweet tea, shrimp and grits, and collard greens with pepper sauce to eat. Was delicious, and when I was done I spoke like Foghorn Leghorn for a full half hour. Afterward we walked into the only grits-mill that’s still active in South Carolina (apparently there were forty-one of them at a time). Finally, we drove over to the capital building and walked around the grounds a bit. And, last night on the way to dinner, one of the locals drove me around USC campus a bit. So, at least I got some culture out of the trip. And, being that this paragraph is the perfect lead-in for the Wednesday edition of “In Pictures.” Enjoy:

Transition: I’m going to change styles drastically, one of the negatives of not writing all in one sitting.

On a plane with a full bladder and the seatbelt light won’t go off. Thumb-typing on the BlackBerry, I’m pretty fast now. Finally I break down and just go, I don’t care if my singular rebellion is a catalyst for all-out anarchy or not – I have to pee. Decided to listen to the Wrens album from some years back, don’t know why, other than that it almost always sounds perfect to me. The clouds below is look like a frothy ocean, they often do. They look all pillowy and soft, like we could bounce to a safe landing were we to plummet through them. Guess clouds are a little misleading, kinda like a wolverine (for some reason they look non-threatening to me).

I wonder how many other humans are in the air right now… thousands? Yeah, maybe tens of.

I think can smell my own feet; maybe it means I need new sneakers. Not a stinky smell, something more like sweet; maybe only I smell it. It makes me aware that I only brought enough clean underwear for a three day trip, didn’t expect the extra night in Chicago. I hate reusing underwear.

The clouds broke. I see a big river down there, a factory alongside it, smoke coming from its smokestacks, and some mountains and roads. Wonder where we are? I hate that I’m so bad at geography. Makes me feel ignorant. Like I’m contributing to the stereotype of the dumb American who thinks he doesn’t care about what he can’t see.

From another hotel room, this time in Chicago – goodnight.