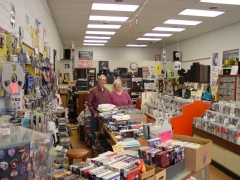 Monday my friends. An eventful weekend, that I wrote and wrote and wrote about… and then decided, in the eleventh hour, to scrap for this canned entry instead. Don’t discount it just because it’s been written for a while though, I promise it’s still good. As you read it, I’ll be flying north-by-northwise to Oregon for the week, where we’ll be spending Thanksgiving with the family. Wish me well, then, and I’ll hit you with some more words when I’m on the ground. Enjoy.

Often when I write, my memories pull me to things I’ve put down in words before. This entry is an example of that. I’ve written about the history and development of my love for music from multiple angles before, but not centered directly around the “record store” theme. And, that’s what the keyboard called my fingers to do today, write about my then-burgeoning musical fanaticism as related to record stores. Having written in bits and pieces about this already, I figured I’d link you to as much related content as I could query up, just in case you wanted to read the scattered version before the (hopefully better-reading) amassed version. So… links numbers: one, twain, and thrice.

At an early age, my obsession with the “record store” began. I guess the initial seeds were planted when my older cousin turned me on to Depeche Mode, sometime back when I was in the fourth grade. I can remember going into record stores at the mall and asking to see their Depeche Mode cassettes. I didn’t have money to buy them, of course, I just liked turning them over in my hands, looking at the artwork and reading the track titles. And, since, for some odd reason, the store in the mall kept the tapes behind the counter and the records out front, I’m sure I bothered many a clerk by having them retrieve stacks of tapes they were sure “that nine-year-old” wouldn’t buy. Over time, I learned to funnel the wee bit of discretionary income ten-year-old-me got away from Garbage Pail Kids and invested into music on tape. I began a small collection, mostly things like Depeche Mode, A-Ha, Pet Shop Boys, and the like.

Then, one day near the ripe age of twelve, our family went to visit my grandparents at their mountaintop house in Southern California. While there, my Depeche Mode introducing cousin, now himself settling well inside his teenage years, showed me the first “CDs” he had purchased. Apparently, his dad, my uncle had a new-fangled Edison that would play the odd, grooveless, silver discs. He had U2’s War and Joshua Tree, and he raved to me about them; I can still remember the passion in his young voice as he described just how good the music was on those little plastic things. It took me a while to make the conversion from cassettes to CDs though… several more years, in fact. Those buggers were expensive, and I could buy a humongous “brick” of 90min blank Maxells at K-Mart for like $10. Predictably, as I got a little older, and had a little more change in my pockets, my collection began skewing in the “dubbed a friend’s copy” direction. When I met Kyle after we moved to Florida, things exploded. With the influence his dad had on his extremely-mature-for-his-age and varied musical tastes, and the mainline connection to his dad’s collection in Texas (via dubbed cassettes again, but of course), my horde of lovingly hand-labeled 90min Maxells flourished.

Shortly thereafter, after I’d become teenage no-good in my own right, a little “record store” (although, there wasn’t a lick of vinyl but for the “DJ” albums in the back) opened up tucked into a corner of our local supermarket-anchored stripmall. Being only a few miles from my house, I used to ride my bike there regularly to peruse the selection. Owned by a middle-aged guy named Roland who had muscular dystrophy, or maybe ALS, I can’t be sure. He walked the store with the aid of those metal hand-gripped “wrist crutch” things, spoke with a thickly-slurred speech, and was actually a pretty ill-tempered guy – from what I could understand. For the most part, though, the store was “run” by a longhair in his early twenties. He was almost always there when I went in, and I used to remember his name, but it’s gone now.

At some point, in an effort, I’m sure, to flog dismal sales, Roland began offering his customers the option of “previewing” CDs. Previewing CDs was a relative new idea at the time, and plenty of stores were busy implementing in-store “listening stations” for the purpose. There was one key difference with Roland’s model, however, he let customers “preview” the discs overnight, for a $3 fee. Nevermind that this practice would be highly frowned-upon by the WEAs and Sonys of the world, it enabled him to make his cost back on the disc with just a couple “previews,” and you agreed to buy the disc if it came back in less-than-pristine state (only happened to me once, with Coil’s Stolen and Contaminated Songs. (If you haven’t heard that album, you likely never tried mushrooms in the 90s, and, unless you plan on trying them now, there’s really no need to hear it at all). Anyway, I “obtained” many an album through this “rent-a-CD” scam, dubbing them off for less than it would’ve cost to buy a cassette new. I used to rent an album a night (you could only do one at a time), Roland would acidly correcting me when I asked to “rent” something – “Issh nah rentihg!,” he’d chew around his tongue, “Issh pree-yooig!”

On a sidenote, that longhair worker and I developed a sort of record store friendship over time. He’s special order things for me, and even recommend new music to me based on what I bought and rented. In fact, he’s the one who first suggested I try out Pulp’s Different Class, which I now hold as one of my absolute favorite albums of the 90s. Kinda cool.

On another side note (the other side, perhaps), I can’t help but think now how a CD “rental” policy would translate for today’s teenagers. At the time, I was renting and dubbing CDs at the rate of one a day. Today’s kids would be renting and ripping or copying digitally, completely lossless. They could then make a torrent of their newly acquired album, and put it on the web almost instantly. I, on the other hand, had to actually purchase all that dubbed music again on compact disc later in life. Oh how times have changed…

Roland’s music store eventually went out of business. In fact, when it did, the guy who owned and operated the music store where I was working at the time bought a lot of his unsold stock. Oh, that’s right, we skipped that part, didn’t we? After graduating highschool, I took my love of the record store to a new level by actually seeking employment at one. I loved working at that store, and my impressive knowledge of music, for a guy of my age, helped make me a successful salesperson. Soon, I was “promoted” to the position of assistant manager. This meant nothing, really. A tiny raise, keys to the store, and being entrusted with counting the day’s take before recording it in the books and dropping it in the floor safe. Other than that it was just more headache: having to deal with upset customers and stupid merchandise return policies, and having to ruin peoples’ weekends by cold-calling them looking for someone to cover a slacker’s deserted shift. But man, I absolutely loved that job… headaches or no. I was around my people all the time, around the music. More than that, I could buy CDs at a buck over cost. I must’ve put half my paycheck right back into the boss’ pocket every single payday. He must’ve loved it. The job also came with “access.” If I wanted some rare Prodigy remix CD5 that was only released in limited quantities in the UK back in ’91, chances are I could page through one of the distributors’ books and put it on backorder. It sometimes never came, sometimes took months, but, more often than not, I’d score the illusive item.

This “access” turned out not to be limited to “legit” rare items, either… nope. One day, I was surprised to see a few CDs marked with neon pink “import” stickers mixed in with the regular stock. I say surprised, because, by then, I was entirely familiar with the kind of CDs mom-and-pop shops tag and sell as “imports.” Yup, bootlegs. Illicit disks that cost as much as a typical CD wholesale, likely due to the shady way they have to be mass-produced, shipped, and advertised, and retail for anywhere from $25 to $30 a pop. I asked the boss about it, and she replied that some guy had come into the store with a list of items he could get, and a trunkfull of items he had on-hand. She called the owner, and got the OK to do some speculative purchasing and see how they sold (the markup was good per disc, earning at least 200% on each, if not more). She took an empty box, accompanied the man to the parking lot, and took off his hands some discs she figured might sell, she also took a copy of his larger inventory list. I immediately asked to see the list, and was delighted to see several Beatles’ bootlegs I’d been after online, some of the original Yellow Dog releases that were already completely out of print. Finding a source like that for bootlegs, and at “cost” (well, his cost, at least), was like a dream come true to me.

I had a few truly enjoyable years in the employee of the record store… but then I had to move away from home and go to “real” college. Not long after, a new friend from my Circuits class introduced me to something called Napster, and, overnight, my love affair with the record store was over. Oh sure, I still enjoy walking into one, the least corporate the better, and perusing the stock. There’s some sort of magic charm those places have for me, I’m drawn to them even more than the traditionally-classic male retail pulls: home improvement, electronics, and books. I’ll always like record stores, I’m sure… it’s just that, for me, they’ve become quite obsolete. The internet is now my preferred music distribution channel. Because, obtained legally or otherwise, they’ve got the record store beat on price and stock.

That’s it. Have a good Monday. Goodnight.