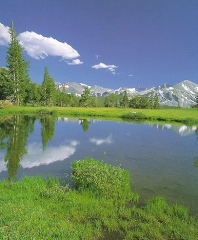 Well, if you haven’t heard by now – we had to cut our epic hike short. A mere two and a half days and twenty-five miles in, we called it quits.

That’s what ultimately halted our progress. Not actual falling snow, just the threat of it. For the past few days on the trail, talk from fellow hikers (of which there were very few) was ominous and forboding: an unexpected and early snowstorm was moving into the high Sierras.

It was the same “rain on Thursday” we’d heard about earlier in the week, but it had now turned into something worse – at least from the mouths on the trail.

Worried, we continued on. We made great time on our second day, hitting all the planned stopping points and making it to our camp by about 4:30pm. Being our first ~12mi day, we both felt pretty good about our pace and strength, although, truth be told, we were both fairly well beat down as we rolled into camp.

We pitched tent at Upper Cathedral Lake and immediately jumped in to “bathe” before we lost the sun. After washing ourselves and our clothes, we ate a hasty dinner and climed into the tent to escape the growing cold.

Talk before bed was all about the storm. “What are we going to do?”. “How and when do we make the call?”. In short order we had decided that we were most definitely not prepared for snow, and we could not continue the hike if snow was coming. We didn’t have the right gear or clothes, and we’d soon be too deep in the high country to escape if caught by weather.

Before a fatigued sleep took us, it still a pale light outside, we agreed that, if there were more than a 50% chance of snow at our elevations, we’d have no choice but to call off the remainder of the trip. We’d confirm early Wednesday morning when we got to Toulumne Meadows, where we could get a more accurate forecast than the game of “telephone” that is trail communication.

We hit Toulumne Meadows earlier than expected, settling into a brisk pace on well-rested legs in the morning. Our first stop was the visitor center, where our fears were confirmed: Snow above 8,000ft forecasted Wednesday evening through Sunday. We’d already agreed that this confirmation would be the death knell for the trip, so it was done.

We hitched a ride down to the valley with a Japanese couple we’d met on the trail who we’re also high-tailing it away from the weather, and called for a ride from Anthony’s dad.

It was sad to have to leave, as we we’re both still feeling pretty good and confident. But, I am glad we got word of the storm when we did. Had we not got word at all, or had we got into the high country without warning, we could’ve been in serious trouble. In the end, I suppose it was good we found out when we did, while we still had an out.

The hike is over. Sucks.

I’m ready to see my wife and daughter, anyway. Goodnight.