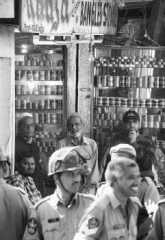 When Sharaun and Keaton and I were home in Florida the past couple weeks, I had some time to hang out with my stalwart buddies Andy and Kyle. These are guys who I’ve known since my initial days in Florida after moving from California, give or take. You can get a bit of history on them here on my now-defunct and no-longer-linked anywhere “cast of characters” page (the page got too outdated and I always felt I was slighting someone with their “bio,” so I scrapped the whole idea). Anyway, one night we were sitting outside at a little brewpub on the beach, amassed around a table enjoying beers and conversation, and the topic turned to the shenanigans of our past (it often does). Andy mentioned that, at some point when he and I were in college (at arch-rival institutions), we’d bounced an e-mail back and forth between us called “the list,” in which we tried to document some of the funnier and more memorable events from our “wilder” youth. What’s more, he said he still had “the list.”

Well, here we are just two days back from Florida and Andy lived up to a promise he made to me when I heard he still had the list – he scanned it in and mailed it to me. Seems like he printed it on an old dot-matrix printer way back then, and reading it now I was surprised to find how many things I actually remembered quite well. In fact, I’ve even written about some of them here on the blog. My long-term goal, though, is to write a paragraph about each line item on the list (at least the ones I can remember). Anyway… you can check out the list in it’s entirety here: page1, page2, and page3. There are some hilarious stories hidden behind those little one-liners. (Actually, I just looked again at Andy’s scan, and the dates show we did it in June of 1996 – a mere year after graduating high school. So, at that point I was still in junior college and not true university, as I stated above (just trying to be factual here, folks)).

Got turned onto the newish “Tapers Section” feature of the Grateful Dead’s massive meandering website from a music forum the other day. Every Monday, a new bloglike entry is posted, and each post is chock full of MP3s representing snippets of shows played during that week in Dead history. A stellar concept if you ask me, but I’m not surprised the Dead are, even posthumously (as a group, at least), on the cutting edge as far as digital music – I’ve written about my respect for their progressive distribution ideas before. Anyway, if you’re a Dead fan, or just want to get an idea of what the whole Dead “thing” is about, the “liner notes” style of the posts accompanying the music lend a lot of contextual goodness to the aural experience. So go ahead, feed your head.

Over Christmas I mentioned to my brother-in-law that our digital camera hasn’t been working right ever since Sharaun dropped it into the cat’s water dish at 2006’s Halloween Bash. He asked what kind we had, and when I said Canon, he mentioned that when he called Canon customer support when his camera’s flash crapped out after the warranty period expired they offered him a “upgrade.” Turns out that Canon runs something like a loyalty program where owners of older model digital cameras can get cut-rate prices on newer models as part of an official “upgrade program.” There’s scant information on this program on the web and it’s not to be found at all (at least by me) on Canon’s official website, but if you call 1-800-828-4040 (in the US) and tell them you’re current make and model they’ll let you know if it’s upgradeable and to what. In my case, my S400 is upgradeable to an SD450 for $159. Not bad compared to the Amazon price of $317. Another buddy called about his A30 and they offered to upgrade him to an SD550 for $189. A better deal for him, to be sure, but the $159 price for a working, newer camera sure is enticing to me. Haven’t jumped on it yet, but likely will soon.