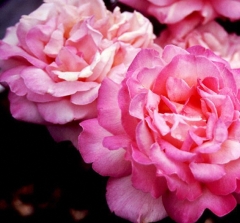 Well, a restful and easy Christmas day was followed up with a fitful and restless Christmas night. Keaton was up and down with her fever, which peaked at 103.5° F around 1:30am. I called our on-call pediatrician who suggested we give her some Tylenol, but we’d already exhausted what we’d brought with us and not much is open at 1:30am (especially on the day that had just so recently been Christmas). Poor babygirl didn’t want to sleep unless she was being held, so I ended up trying to catch my Z’s as she slept with her sweaty little head in the crook of my arm. The doc also recommended we take her in for a checkout first thing next day. Being thousands of miles from home, that would be a little difficult, and our options were limited. Luckily, Sharaun’s mom works at a pediatrics office here and was able to sneak us in. The doctor that saw her said she most likely has roseola, a common viral infection in children.

One of the things I like about it here in Central Florida is the deep roots the people seem to have to the area. People know people, know history, and have long and storied memories. Families know families from generations back, who used to run what auto shop; who owned what florist; who taught 5th grade for thirty years; etc. People know the land too, what used to be on that corner before the bakery, and what before that; just how long ago that tract of new manufactured homes used to be ranchland; which fishing spots have been hot in which years, and where to go now to land a red sure-thing. Folks’ lives are more ingrained into their surroundings because they’ve been here and seen things, and I like that sense of memory. We’ve met families with roots in California, I’ve written about them before, so I know they’re not a phenomenon exclusive to Florida – but here it seems like the percentage of folks who’ve been here for generations is higher. It’s a good connection to have, and enviable.