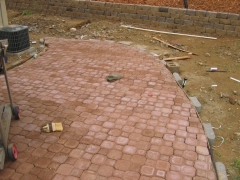 Friday night I had a great dream. I dreamed that some friends of mine had come over to take a look at the paver-stone porch I’d built (with help) in our backyard, as they were considering such a job themselves. As we all bent and stooped to inspect my work, I noticed a small hole near the border of the stones, right were they end in a curve and give way to the grass. Looking more closely, I could see that, under the stone porch which I’d pieced together a stone at a time, there was a vast opening. Using the supernatural physics of the dream world, I poked my head in to get a better look.

Opening up before me was an immense white room, its cavernous emptiness broken up only by sparsely-placed alabaster white columns reaching up some 20-30ft at spots to support a ceiling of, you guessed it, pavers. Once in the room, the fact that the space was easily a thousand times greater than that of my porch above seemed to melt away (like facts often do in dreams, I guess). I couldn’t take my eyes of the impossible canopy above me, the underside of my paver porch above looked much like it did topside, but down here seemed supported by nothing for long spans between the aforementioned columns. The whole thing was curved and warped, seemingly unable to stay together, but defiantly there nonetheless as undulating waves of tightly-woven bricks pitching up and down and left and right into the emptiness. I could see the sand I’d swept into the cracks to help “set” the bricks in place but knew that there should be no reason the structure should be able to support itself with such huge open spaces underneath.

Making the picture even more odd, at spots there were long “fingers” of assembled bricks, fitted tightly together with sand and arcing off from the roof to delve downward into the cavern. The fingers followed the warped curves of the brick ceiling above them for a bit, then got thinner and thinner until ending in a point. They, too, hung impossibly in the air above me, supported by nothing other than the point where they grew from the brick rooftop. I realized while looking at them that they were mistakes I’d made while laying the porch above, spindly brick tentacles showing where’d I’d gone off-course and later corrected myself.

As I walked around wondering how the whole thing hadn’t yet caved in, I came upon a humongous bowl-shaped sagging which was supported at it’s lowest point not by one of the white columns but instead a 10ft yellow ladder. It was the largest and most precarious dip I’d seen in the whole warped construction, and it looked to be held up as an afterthought with a ladder from someone’s garage. I remember thinking of how often I’d walked on the porch above with Keaton, and thinking we could never do it again for fear it might crumble beneath us and send us flying to the white floor so far below.

3 Replies to “what’s with the ladder?”